A Guide to the Latest Architecture of New York

New York is today witnessing an unprecedented construction boom. The city’s skyline changes every year, expanding with ultra-expensive apartment blocks, while its industrial architecture has become a center of attraction.

In this city overflowing with information and architecture, we have selected ten properties built in the past ten years that are worth seeing with your own eyes. The signature of Frank Gehry, the architect of the Guggenheim Museum in Bilbao and Fondation Louis Vuitton in Paris, is immediately noticeable when looking at his buildings. When you view the New York by Gehry residential skyscraper, you can train your creative thinking: its polished steel facades in places resemble folds of cloth and in other places waves. When designing this building, Gehry became the first architect to use CATIA — which is today a popular program for 3D-modeling. Architectural critics then wrote that 8 Spruce St. had become a symbol of the switch to the digital period in architecture. Oculus transportation hub links New Jersey with Manhattan and enables pedestrians to reach the towers of the World Trade Center. In the three years since its opening, it has become a symbol of New York and an essential element in tourists’ Instagram. The Spaniard Santiago Calatrava said that the image of the future building was given to him by a bird that a child was releasing from its hands. He called Oculus his present to New York, although the locals weren’t too pleased with such an expensive gift. During construction, the building’s cost grew from $2.7 bn to $5.2 bn. Oculus now bears the title of the most expensive train station in the world. 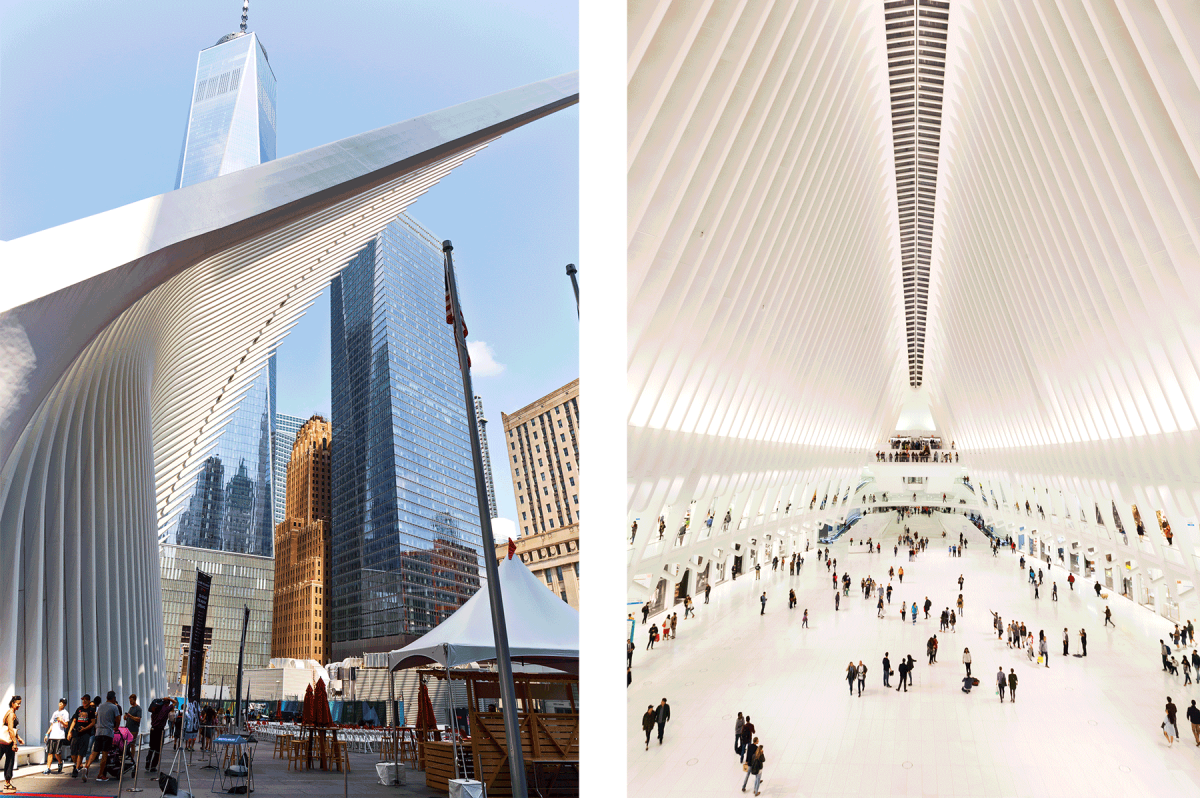 Winner of the 2005 Pritzker Architecture Prize, Thom Mayne is famous for his deconstructionist, externally aggressive projects. It’s no surprise that the building of the legendary Cooper Union University is called either the “ugliest” or the “most beautiful” piece of new architecture in the city. Mayne himself has said several times in interviews that creating something neutral would have meant failure for him. He is inspired by unfinished constructions and irregular lines. In Cooper Union, which trains future artists, engineers, and architects, there are many examples of such asymmetry. Perforated steel panels on the building’s facade create an impression of an unfinished yet entire property. The atrium is connected to nine floors thanks to walkways “wrapped” in steel tubular constructions. Almost immediately after it opened, the building was awarded a certificate for energy efficiency and ecology by LEED Platinum for its energy-efficient facade, technology using rainwater to water the plants, and low carbon dioxide emissions.

One of the most photographed buildings in the district of Tribeca — a warehouse for salt belonging to the city services. It was designed in the shape of a salt crystal with polished concrete surfaces and using the latest technology. The building’s shape and its walls’ angles enable trucks carrying the anti-ice salt to get inside easily. New York would not be New York if it didn’t use such buildings for its art and fashion. Hence this cult building frequently appears in fashion-shoots. In 2015 Heron Preston held a show here for his collection of uniforms for the New York Sanitation Department. The Shed is a rare example when a building’s idea and program first appeared in the minds of the architects and were then implemented in real life ten years later. And not just anywhere, but on the territory of Hudson Yards, the biggest developer project in New York’s history. Located in West Manhattan, The Shed is a cultural center where the very best in contemporary art, theater, cinema, and music will be on show in the next few years.

The significance of The Shed is in its technology: it’s got the best there is in modern transformation architecture. The main eight-story building is attached to a moving platform, which in five minutes can be moved out, nearly doubling the construction’s space. The extra space enables dozens of additional scenarios to be hosted: from concerts to theater and gigantic installations. Another landmark building has appeared directly opposite The Shed. Vessel’s shape and color make it resemble a beehive or cedar cone. This open viewing platform with a hexagonal shape consists of 154 flights of stairs and 2,500 steps.

Stephen Ross, the developer of Hudson Yards, held negotiations to create a symbol of the Hudson Yards district with the most expensive modern artists and sculptors — Anish Kapoor, Jeff Koons and Richard Serra, but then one of his colleagues recommended the eccentric Brit Thomas Heatherwick.

He was the author of the crazy UK pavilion at Expo 2010. The vessel has already received its portion of criticism: from architects for its “excessive architecture” and from visitors for its lack of benches. In any event, it’s one of the most visited buildings in New York. 432 Park Avenue is the tallest apartment building in the Western Hemisphere. Together with other apartment skyscrapers from Billionaires’ Row it has changed the outline of Manhattan forever. The windows of 106 apartments on 96 floors display views over all parts of the city. The cost of apartments here begins at $7 million, and the most expensive was acquired by a Saudi businessman for $95 million. The building’s architect Rafael Viñoly said that he was inspired to choose the skyscraper’s shape by the famous waste paper basket of Austrian architect and designer Josef Hoffmann. That said, locals see in this tower an allusion to the grid-like structure of Manhattan.

Social housing built by a famous architect? And why not? This building appeared in New York’s Harlem neighborhood several years ago, built by David Adjaye, who also designed the Skolkovo Management School in Moscow. Not your typical design, Sugar Hill is, rather, an example of neobrutalism with its hacked shapes and concrete on its facades. It’s worth visiting Harlem just to see them, as the district has long shed its reputation of a dangerous place with street crime. The building’s construction was financed by the local government and philanthropists. Hiring an apartment here costs from $350 to $1,500 per month. Even before construction was complete, there were over 50,000 applications to receive one of these 124 apartments from underprivileged families. The city suffers from a catastrophic shortage of affordable housing, hence Adjaye’s building, which even includes an art center for children on the lower floors, became a true dream for the locals.

The largest of New York’s wastewater treatment plants, this is an example of dialogue between the authorities and population, and of how industrial architecture can become a center of attraction. While the plant was being reconstructed and expanded, against which the Brooklyn locals were protesting, the local authorities engaged not only architects but also landscape designers, light specialists, and sculptors.

The result was that tours are taken of Newtown Creek, a promenade with installations by contemporary artists was opened around the plant, and couples go on dates in the surroundings of these futurist reservoirs lit in evening by blue light. This building, with an ideal cubic shape containing the New York Public Safety Answering Center II, is a modern version of a fortress with arrow slits and a moat. The New York authorities combined in a single place in the Bronx the most important city departments — police, fire, and medical, so that they could cope with large-scale emergencies more effectively. For safety reasons, the facade contains only a few long, narrow windows. Landscape designers erected a defensive barrier around the building. You won’t be able to admire the details from up close, but even from a distance, this metallic cube will impress you with its simultaneous brutality and weightlessness.

New York, which was always famous for its conservative architecture, is changing fast: the city constantly attracts ever more architects from around the world, who are reinventing its image. And now it’s not only a global financial capital but a center with a concentration of modern art and design. These ten buildings are evidence of how architecture here is deeply entwined with the latest art. Anyway, if it’s classical art you’re after, you can always dine at the Palm Court in the Plaza hotel or climb up to the viewing platform in that very symbol of art-deco — the Empire State Building.