Berlin’s flea markets came on the scene relatively recently, but they quickly grew to become favorites with the locals who like the idea of something unusual with a bit of history. Little by little, these markets started to attract tourists, to the extent that nowadays it’s almost impossible to imagine a trip to Berlin without a visit to at least one of them. We’ve pulled together a list of 11 of them, 11 chances for you to pick up a memorable keepsake or a gift for someone special.

This would suit those who don’t intend to buy anything but who want to get a feel for Berlin’s oldest market.

This was the first flea market in Berlin, dating back to 1973, when it all began. It was founded by a multi-talented individual called Michael Wewerka, poet, art dealer, journalist, and documentary producer. Michael talked about how, at the time, there were already flea markets in Hannover, whereas no-one would take the idea seriously in Berlin. Ignoring this, Wewerka decided to give it a go anyway. It was tough at first, and sometimes only two vendors would turn up to the market, but over time, the inhabitants of Berlin got used to the idea of shopping for second-hand goods, haggling over the price and taking a bargain home with them. Now, Michael Wewerka’s flea market is as popular with tourists as it is with the local population. You can find literally everything for sale here – old furniture, paintings, china, crockery – and, of course, clothing, vintage postcards, autographs, buttons and door handles.

Many of the stalls here will also accept payment by card. Such a civilized approach does, however, impact on prices, which tend to be a bit higher here than at other markets.

Flea Market in the U-Bahn (Underground)

At around the same time as Michael Wewerka’s market was getting off the ground, so was one of Berlin’s possibly most unusual flea markets – one in an underground railway station. During the time of the Berlin Wall and the division of Berlin into two cities, the number of passengers travelling on what is now the U2 line between Wittenbergplatz and Gleisdreieck stations fell dramatically, as this section was not served by trains. A flea market was active at Nollendorfplatz U-Bahn station for 20 years. Goods were on sale from the stationary train wagons and on the platform itself.

Alongside the market in the abandoned station, there was a restaurant called Die Nolle, where the locals could relax after their shopping or simply come and enjoy Sunday brunch. The restaurant still operates to this day, although after reunification it had to move from the station platform to Nollendorfplatz in the Mitte district, at S-Bahnbogen 203, Georgienstraße.

Ideal for those who want to combine their browsing with a stroll in the park and take in some open-air music.

This is the best-known flea market and attracts crowds of visitors. You’ll find everything here you can imagine – clothing, furniture, jewellery, household goods and things which really should be thrown out but which people still want to sell – and why not? It’s popularity has meant that the Mauerpark market has lost a bit of its authenticity in that some of the stalls aren’t regular householders selling their stuff, but fashionable boutiques and young designers. 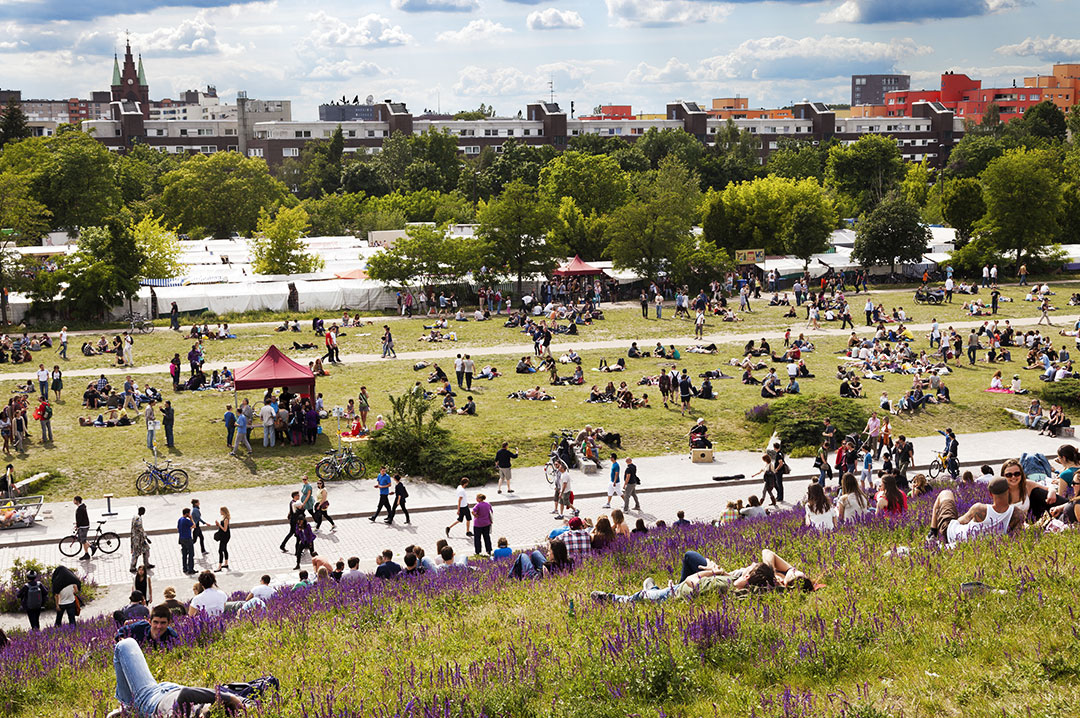 This has an influence on what you pay and on how far you can haggle down. Nonetheless, this market is worth a visit even if it is to experience the atmosphere of the Mauerpark itself. On Sundays you can enjoy the playing of street musicians and, deep in the park itself, you can even participate in some karaoke if the mood takes you!

You will also find plenty of stalls selling food ranging from steaks to Vietnamese dishes, Turkish specialties, and vegan dishes. For between €4-€8 ($5-$9) you can eat well and have something refreshing to drink.

Take to the stage!

Every Sunday in fine weather the Mauerpark hosts karaoke, known to all Berliners and beyond. It is the brainchild of Joe Hatchiban, originally from Ireland, and has been going on for 10 years. He sets up large speakers in the park’s amphitheater, you order the track you want to sing to, he hands you the microphone, and you’re away. Anyone can take part and the audience cheers on not just those who can hold a tune, but also those who are clearly tone deaf. All languages are catered for, people dance the Macarena, and a good time is invariably had by all.

For those who don’t mind crowds and enjoy historical artefacts.

Five minutes’ walk from the Mauerpark on the Arkonaplatz, you’ll find the smallest flea market in Berlin. Despite its close location to its much bigger neighbor, this is still a pleasant place to visit, where the traders still tend to be locals. They sell mainly trinkets from the mid-20th century, about which the sellers are certain to tell you an interesting story. If you want something unique or retro, this is the place to come. This market’s full name is Antik- und Buchmarkt am Bodemuseum – the Bodemuseum Antiques and Book Market. This is paradise for antique collectors and book lovers. Old editions of books, rare stamps, postcards, photographs, and coins are all here. You can also find crockery, cutlery and small household items.

The market’s organizers are fond of telling romantic, even mystical stories. There’s one about a writer who was once strolling amongst the market stalls and, as he began to leaf through one of the books, discovered that he himself had written it. Not only that, in this copy, on the first page he found a dedication from his wife, to whom he had been married for 20 years. The last sentence read: “if this book finds its way back to you, it’s a sign of our closeness”. For connoisseurs of antiques.

This is the place for lovers and collectors of antiques. For many years the existence of this market did not register with the trendier, fashionable set, so you are unlikely to find anything contemporary or technical, clothes or knick-knacks which people reluctantly throw out but from which they are not reluctant to try and earn a few pennies. No, the Ostbahnhof Flea Market (Antikmarkt am Ostbahnhof) only deals in antiques and collectibles.

For those who want to do as the locals do on their free Sundays.

One of Berlin’s most popular jumble sales, but not quite yet up there with the Mauerpark market, which is close to hand. There’s no specialist theme here – they sell everything except antiques. What’s on offer is not so different from the other markets – clothes, collectibles, accessories, and other bits and pieces. The stands are arranged around the edge of the square, so one round counts as a lap of honor.

The market is situated on Boxhagener Platz where there are also many cafes and restaurants, but you’ll also find ways to fortify yourself on the square itself. This is an ideal way to enjoy a Sunday stroll around town and to pick up an unusual keepsake. For hipsters and those who are on the lookout for cool souvenirs and designer items.

The stalls of the Nowkoelln Flowmarkt are found right between the districts of Kreuzberg and Neukölln and situated on the picturesque banks of the Landwehrkanal. It’s the most creative of Berlin’s flea markets, dominated by young designers, jewelers, and artists. This is the absolute must-visit place to pick up unusual souvenirs for your artier friends.

Prices on Nowkoelln Flowmarkt may be slightly lower than at other markets in the city, and the sellers are always willing to reduce prices a little. It’s a wonderful atmosphere that also attracts people who don’t plan to buy anything at all: you can simply grab a cold drink, sit on the embankment and observe the boisterous trading. A huge Turkish market is open here on Tuesdays and Thursdays — this is the best place to try freshly-made oriental dishes and home-made confectionary. For those who like to browse in a laid-back atmosphere.

This market is open from April to October in Berlin’s favourite park, the Prinzessingarten. Ten years ago, the site was a rubbish tip, but the local inhabitants got together and created Berlin’s best known kitchen garden. Vegetables are grown here and lectures are conducted about how to live a greener life. The Kreuzboerg Flowmarkt lends itself to crowds as well as smaller groups of people. Most of the stands are run by private individuals selling a range of household items, music, pictures and articles of clothing. If you want to take a break from browsing, you can go for something to eat in the market café where they serve dishes made from the produce grown in the kitchen garden. 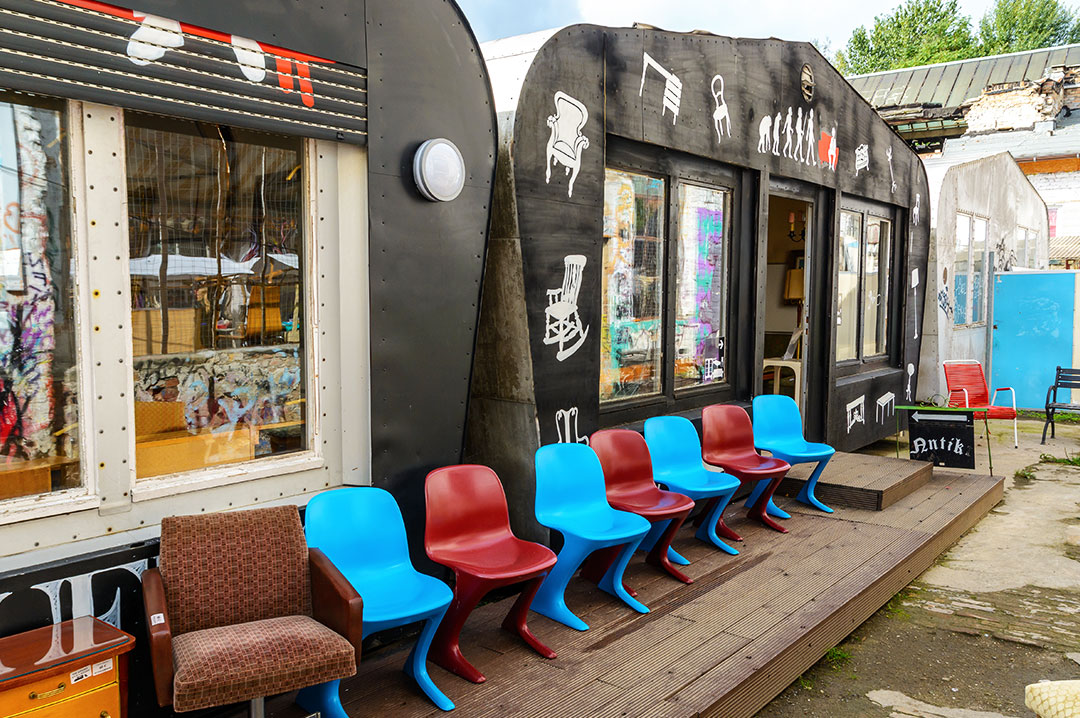 It’s worth the trip out to Marheinekerplatz Flea Market even if it’s just to see the Bergmankiez neighborhood, as it’s one of the most picturesque areas in Berlin with its 19th century townhouses and a large selection of restaurants, cafes, and shops catering for all tastes. There is also the Marheineke Markthalle covered market where you can buy food from all over the world, from French cheeses to Asian specialties.

The flea market functions in the same vein as the neighborhood itself – unhurried and laid back, where you can just wander around aimlessly and check out what’s on offer. In my experience, this is the place where you can haggle with the best results. Even for bigger purchases, you can get the price down quite considerably without any great effort, and all this with a smile and the feeling that both buyer and seller got a good deal.

On the nearby Chamissoplatz, there’s also a Saturday organic market selling fruit, wine, and home-made cakes. For those who didn’t make it to the day market, who are planning to go clubbing and have a shop around at the same time.

A flea market in a nightclub? Well, this is Berlin, after all. Once a month in the legendary night club SO36 – Berlin’s former punk mecca, a cult venue which has held on to its status even today – they host an evening flea market for people who want to get hold of something interesting and dance to the latest DJ set. There is limited space in the club, so sellers here have to apply, and the organizers choose those who will have the right to set up a stand. It’s mainly private individuals plying their wares here, mainly records, limited edition CDs, clothes and other things.

There is a bar in the club where you can relax with a cocktail after your shopping. There are also counseling sessions, so if you speak German and something is bothering you, you can get advice there and then. For those who love unique items reflecting earlier times.

One of the most recently established flea markets in Berlin and definitely one of the most original. The Vintage Market is totally devoted to clothes and accessories from the 1900s to the 1970s. In the summer it takes place outdoors, and in winter inside the nearby dance hall which was built in 1905 and survived the bombing in the Second World War. It’s a great venue for such a market. You can enjoy a cup of coffee (vintage, of course) to the accompaniment of DJ sets. The organizers guarantee that if you are looking for anything vintage, here you will find the biggest collection of themed clothing and jewelery. So, this is where you’ll find that 1920s brooch you’ve been looking for all this time.

So, that’s the lowdown on Berlin’s markets. Don’t forget to take plenty of cash and small notes – no point in expecting change when you’ve agreed on a good price. Try to get there early for the best choice or at the end of the day for the best prices. Speak with the vendors and show you’re interested. And, finally – haggle until you can haggle no more – happy hunting!