Bonn in a Day – All You Need to Know

Some know Bonn as the former capital of West Germany, some as the birthplace of Beethoven, but in any case, this town is worth a visit if only to take a break from the tourist hustle and bustle, rest awhile on the banks of the Rhine, take a look around the local palaces and think a while about what life must have been when the great composer was in his creative prime.

Bonn is a small town on the banks of the river Rhine in western Germany, in the region of North-Rhine Westphalia, bordering Belgium and the Netherlands. It’s best to pop into cozy Bonn if you are on a bigger tour of Europe or heading for the Benelux.

From 1949 until 1990, for over forty years, Bonn was the capital of West Germany. After German reunification, the capital relocated to Berlin, and now it’s hard to imagine that this small town of 319,000 people was such a significant political center.

It’s best to visit Bonn in the first part of April as this is when the cherry blossom is in bloom on Heerstrasse and Breitestrasse which is a magnificent sight. The beflowered streets of the Old Town are known as “cherry tree tunnels” and are definitely a “must-see” in Bonn. The quickest and cheapest way to get to Bonn it to take the local train from Cologne. It takes about 20 minutes and costs around €12.00.

If you are going there from Düsseldorf, it will take about 45 minutes by train and costs around €20.00.

Bonn is only a small town, and you can see all the main tourist sights in half a day. The second half of the day can be spent, for example, at the Bonn Museum of Modern Art. 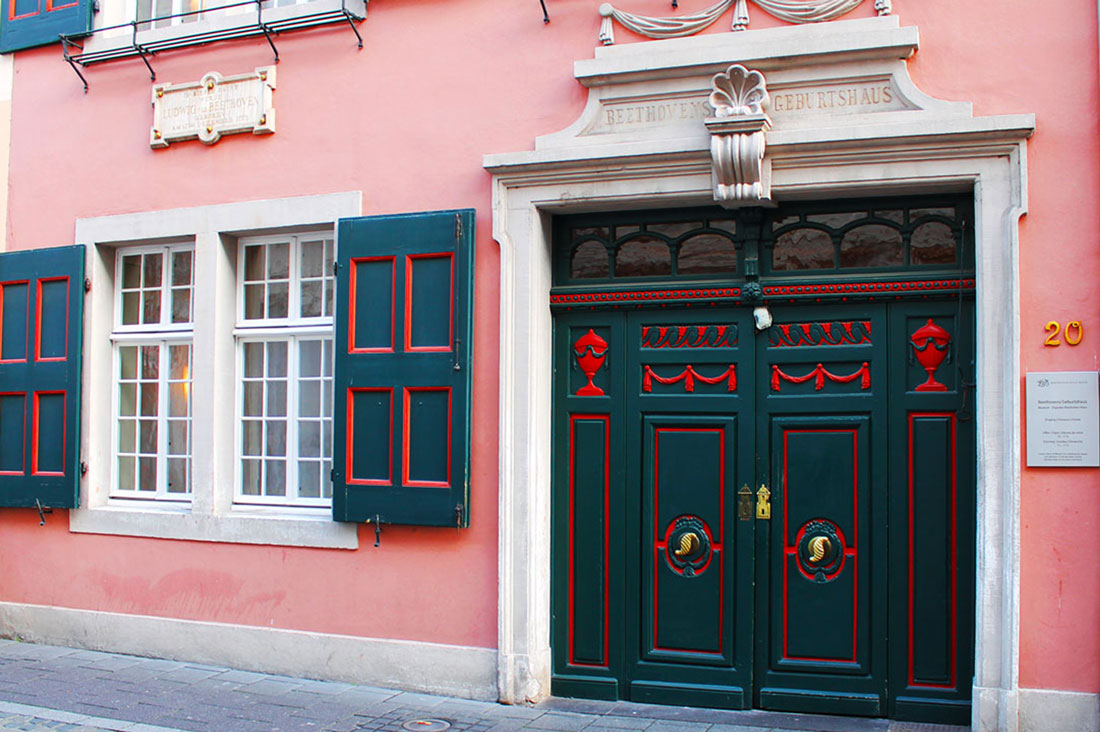 The Old Town Hall (Altes Rathaus) is on the main market square has, in its time, hosted many great political figures such as Charles de Gaulle, John Kennedy, Queen Elizabeth II, and even Mikhail Gorbachev. Every President of West Germany began their term of office with a speech delivered from the steps of the Rathaus. This imposing building is reminiscent of a wedding cake thanks to its white, pink, and blue façade and golden trim. It was built in the rococo style in the 18th century. Nowadays the Rathaus hosts formal ceremonies like weddings and delegations. You can visit it every first Saturday of the month from 12.00 until 16.00 Entrance is free of charge.

On the triangular-shapes square in front of the Rathaus, there is a market. This square has been in existence since the 11th century and was designed for trade from the beginning. Today, the market sells fruit and vegetables, many of them grown locally. The market adds noise, mess, and color to the square, but you can still buy yourself a punnet of strawberries for €3.00 and take them down to enjoy on the banks of the Rhine. The next stop is the Minster or Bonn Cathedral on Münsterplatz. It owes its gothic exterior to the fact that it dates back to the 13th century. Inside are the remains of two Roman soldiers, saints Cassius and Florentius who died defending the Christian faith. Since 2002 two huge marble heads have been placed alongside the cathedral in memory of these two Roman martyrs. They were made by the Turkish sculptor Iskander Yediler.

Next to the Minster stands a monument to Bonn’s most famous inhabitant, Ludwig van Beethoven and this is not by chance. Little Ludwig went to the school which was housed in one of the cathedral buildings and even played the organ there sometime later. The annual Beethovenfest, a classical music festival devoted to the works of the great composer, takes place on this square in front of his monument. This cultural program goes on for four weeks from the end of August to the beginning of October. Beethoven’s House is a museum, historical monument and cultural center all at the same time. The composer was born here in 1770 and here is the full collection of exhibits celebrating his life and work. The collection includes manuscripts, letters, notes, and musical instruments. Pay particular attention to the last grand piano owned by Beethoven as well as his famous portrait. You can find out about the timings of special exhibitions at the museum on its official website. An adult ticket costs €9.00 and children are free. The museum will be under renovation until the end of summer 2019.

Poppelsdorf Castle which was built in the 18th century in the baroque style, is now one of the buildings of Bonn University. It houses the Faculty of Natural Sciences and houses the mineral collection. The castle was damaged during World War Two and was completely rebuilt in 1955. Now Poppelsdorf and the adjoining park where the Bonn Philharmonic Orchestra plays concerts in the summer, are protected architectural monuments. The Friedrich Wilhelm Univerisity of Bonn is considered one of Germany’s oldest higher education institutions. It was opened in 1818, and former students include Karl Marx, Friedrich Nietzsche, Heinrich Heine, Ludwig van Beethoven, Max Ernst, and Luigi Pirandello. Anyone can visit the university for free.

The Botanical Gardens are situated next to the university. They cover 12 hectares, and you can see more than 10,000 species of plants from all over the world. The gardens aren’t just a place for relaxation but are a working place of scientific research. You can come across all sorts of exotic plants here like the giant Victoria water lily from South America, which was named after the 19th-century British monarch. Entry is free.

At the Bonn Museum of Modern Art ensure you visit the collection of works by the German artist August Makk, works by the Rhenish Expressionists and Surrealists like Emil Nolde and Max Ernst and other examples of German art which was created after 1945. The museum building is interesting in itself; it was built in 1992 based on a design by the Berlin architect Axel Schult. Adult admission costs €7.00 and is free for children up to 18 years of age.

A night in a theme hotel

If you would like to spend the night in Beethoven’s birthplace, take a look at the Beethoven themed hotel which is directly opposite the composer’s house in the center of the Old Town. The hotel has a historical atmosphere, small rooms, steep staircases and many portraits of Beethoven.

Bonn is just the place to fall in love with German white wines once and for all. You could also say the same about neighboring Cologne. This is where you can try Riesling, Spätburgunder, Elbing, and Silvaner grape types. They grow in the vineyards on the hills along the Rhine. The most famous wine regions here are Rheinhessen, Nahe, and Rheingau.

You don’t need a restaurant to try these wines. Try first popping into Jacques’ Wein-Depot which is not far from the Museum of Arithmetic. Prices for Riesling start from €6.00 and the Burgunder wines from €7.00. You can see the full range on the shop’s website.

If you are a fan of gelatine bears, then you are in the right place as Bonn is the home to the Haribo shop and factory. Some visitors see the shop like some kind of museum where they can learn about the history of the company and enjoy looking at the multi-colored sweet selection. Shelves holding dozens of different types of jam and sweet soufflé await those with a sweet tooth.

The head offices of this German confectionary company are located in Bonn, and the brand name is made up of the first letters of the founder, Hans Riegel and the first two letters of the city’s name, Bonn. HA-RI-BO.

The local beer, Bönnsch, is considered the gastronomic symbol of the city. You can try it in the eponymous brewery-restaurant Brauhaus Bönnsch which is located close to Friedensplatz. A 0.2l glass of beer costs €1.80, 0.3l costs €2.70 and a half liter costs €4.60. The food served here is traditional German cuisine, such delights as a large pretzel with onion sauce for €3.80 or Bónnsch salad with strips of steak and fresh mushrooms for €13.90. The Bönnsch burger made with beef is €12.50, a beef roulade with mustard sauce, hot apple, red cabbage, and boiled potatoes costs €14.50, schnitzel served with Bónnsch beer sauce and crunchy fried potatoes costs €15.20 – and there is much more. You can see the full menu o the restaurant’s website.

You can try the famous bratwurst and pommes on the Marktplatz from the street vendors. A decent-sized portion costs around €4.50 – don’t forget the ketchup. German street food is quite fattening, so one of these sausages and chips will keep you going for some hours.

Bonn is a city for the unhurried traveler, life moves at a slow pace here, and you can take in almost all the sights in a day as they are all located close to each other in the historic center. There is still the feeling that this was once a capital city and there are regular musical performances as well as the market on the town square, something you dolt see any more in many European towns. It’s as if Bonn kept something special from each period of time since its foundation.