According to many, one of the features shared by all Germans is considered to be their punctuality. James Howes, the author of the book “The Shortest History of Germany,” believes that this idea of German efficiency and punctuality stems from their victory in the Franco-Prussian War. France at the time was the mightiest military power in Europe and the last state to oppose German unification. Contemporaries believed that the defeat of the French was only possible because of the incredible discipline and organization of the German forces.

Before I moved to Germany, I was sure that this stereotype would hold, but after a few years living in this country, the slightest mention of this phenomenal German efficiency just makes me chuckle nervously.

This just is not true. The main thing that always springs to mind for any Berlin resident is the hapless Berlin-Brandenburg Airport project. The airport was supposed to open in 2011, but they found problems with the fire safety systems, and they had t postpone the opening until 2012.. Four weeks later, they put it off again. After this aborted opening, they put it off a further eight (!) times, and each time they really thought they had it right that time. They are now saying that Berlin will finally get its new (or perhaps not so new) airport, and they can start flying from 2020. 70% of locals asked think that the airport will never open its doors. And each day that passes costs the taxpayer huge amounts of money.

Myth No. 2: you can set your watch by public transport

This would be true only if your watch was made by a mad watchmaker. The punctuality of public transport is a real hot potato. At the top of the hitlist is Berlin’s city transport system run by BVG. It is always running late and breaks down so often that their social media marketing team have taken it on and joint the passengers in making jokes about the problems. For example, in Berlin, there is even an opera aria about how badly the underground railway system works. What’s more, in 2017, the BVG posted a wordsearch on their official Facebook account and asked visitors to look for three words. They said that they managed to find “punctuality,” “reliability,” and “satisfaction” – and then they asked what alternatives the visitors might have found… 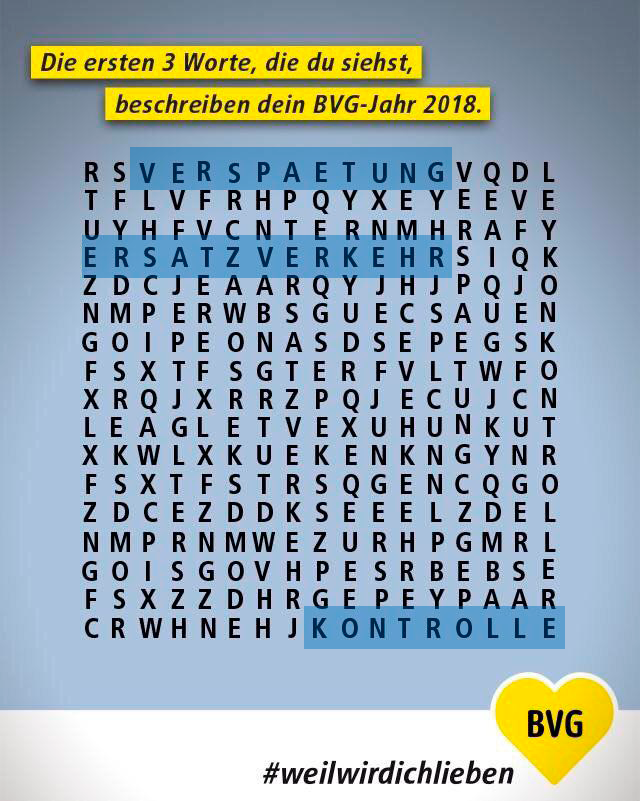 Myth No. 3: local and long-distance trains always run on time

German Railways (Deutsche Bahn) sadly don’t match this stereotype either. The local trains run by then (the S-Bahn) often run late. In the first half of 2016, their trains were late by a total of 139,132 minutes (that’s 2318 hours – or 96 days – or a bit more than three months!)

On top of all that, a train is only considered late if it arrives more than four minutes after its scheduled arrival time. As for the long-distance services, virtually everyone in Germany has a tale to tell. In 2017 140,000 trains didn’t make it to their final destination, and 20,000 never even left the station.

Some folk even find inspiration in train delays. Klaudia Weber, a resident of a Munich suburb, knitted a scarf where each row knitted corresponded to the number of minutes’ delay on a given journey.

Myth No. 4: things get done on time if you agree in advance

All your expectations about efficient services will be blown to smithereens the minute you move to Germany. Even though you might have to wait 2-3 months before getting an appointment to see a consultant in a hospital, that doesn’t mean that you won’t still have to wait around for 30-40 minutes on the day before they get round to you.

Many people have been faced with a situation where they have had to wait months for an internet connection because the engineer simply didn’t turn up at the appointed time. You’re almost certain to be told that it’s because you weren’t at home (despite the fact you took the day off work and patiently waited for this long-expected visit. Not long ago, our cellar was burgled. It happened on a Sunday evening. The neighbor whose property was stolen called the police who answered that since nothing too serious had happened, they would come round at 8 am the next morning. 8 am was moved to 9 am. Then 10 am. They eventually appeared at 11 am.

In all fairness, I do live in Berlin, and most people say that Berlin is not like the rest of Germany. It is true, though, that what’s good for a Berliner might be hell for a Bavarian, and maybe there they are more punctual. One way or another, though, in the capital, there is no point in stressing out about the fact that, here at least, German punctuality is a mere myth.