Just like you can’t stop the sun from rising, you can’t stop change. In 2019, the world’s first Star Wars themed hotel will open at Walt Disney World Resort (Orlando, USA). Naturally, the building will resemble a spaceship.

The hotel is expected to boast 400 rooms and the cost of a three-day stay (two nights maximum) ranges from $900-1,000 per person. This price includes food, entertainment, and entry into the Star Wars theme park. By the way, the drinks at the hotel will be delivered by friendly droids, and you can ask Obi-Wan Kenobi who Luke’s father is in the hotel lobby.

While the Star Wars Hotel is being readied to open and they’re polishing the droids until they shine, we’ll tell you where space hotels already exist.

Each of the 12 floors of the Hotel Puerta América has its own theme, concept, and style. Fans of Star Wars won’t have to climb high—the first floor is dedicated to the movie saga; the inimitable Zaha Hadid designed it, so the rooms are simply out of this world. Her signature style is evident in the smooth, flowing lines of the furniture and walls. It seems as if the room has overcome the force of gravity and is soaring in space and time. Sci-fi lovers will be in their element here. Futuristic elements here include the hotel’s stainless steel pool and the rooftop bar with a sliding roof.

If you suddenly find yourself in the city of Shenzhen, China, be sure to stay at the Pengheng Space Capsules Hotel. There are three types of room in this hotel: a budget double room, an economy capsule room, and a deluxe capsule room. We know that it doesn’t seem like the ultimate dream, but don’t make any hasty conclusions—you will not have to sacrifice comfort or personal space. The capsules in capsule rooms resemble closed boxes so nobody will stare as you sleep with a stuffed Yoda in your arms. The most surprising thing is that the hotel doesn’t have a single employee. Robots very similar to R2-D2 communicate with guests.

Well, here it is the cult, unique, and one-of-a-kind Hotel Sidi Driss, where the first Star Wars film, Episode IV – A New Hope, was filmed. The city of Matmata was founded many centuries ago by Berber refugees, and even now, most of the locals live in the same way as their ancestors in troglodyte caves in the ground. 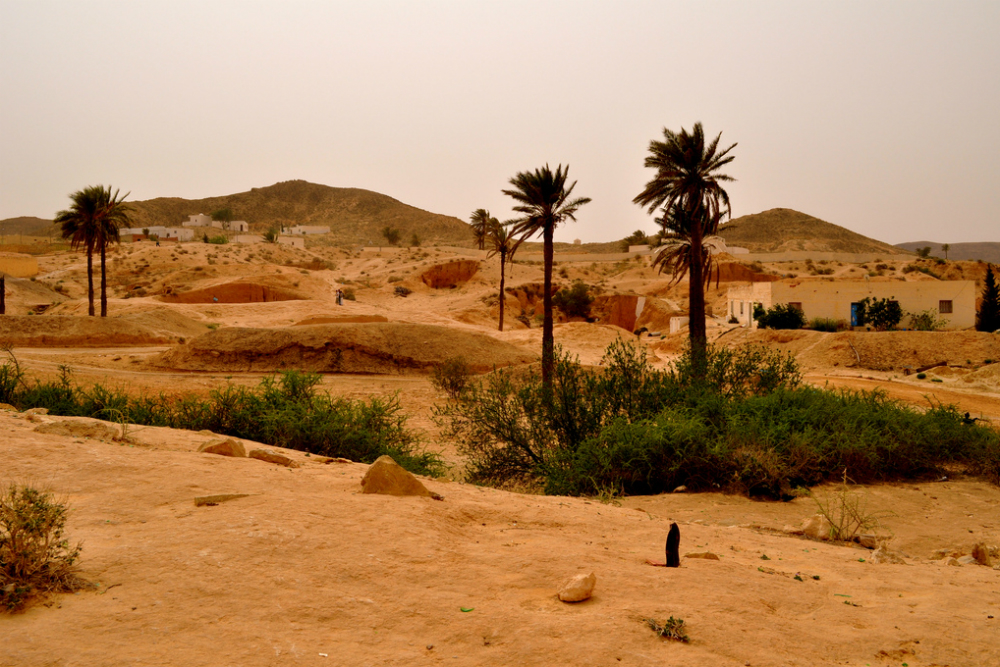 The hotel itself is also chiseled into the rock. All twenty rooms are connected by corridors and courtyards, and, thanks to the layout and earthen walls, the temperature is always cool in the rooms. The original decorations used in the movie are still kept here. There are also tours of the filming locations organized by fans, so ask at the hotel how to find these guides and set out on a movie walk.

Judging by the fact that this is the second Madrid hotel on this list, Spaniards are clearly not indifferent to space and futuristic design. Guests are greeted in the lobby of the NH Collection Madrid Eurobuilding by a huge LED vault screen, the largest of its kind in Europe. There are wireless chargers everywhere, a video intercom system connected to the reception desk, and 3D technologies that transform the person at the other end of the wire into a hologram. Indeed, it’s some kind of parallel universe! The hotel itself is built in a modern style with touches of hi-tech and futuristic architecture. There is an open-air pool with a hot tub as well as several restaurants and conference rooms.

It may seem that you have inadvertently wandered into the clearing where Spielberg was shooting War of the Worlds, but no, this is not the case. This is the incredible Treehotel in Sweden that has several unique types of tree ‘room’: The Mirrorcube, UFO, Bird’s Nest, The Cabin, The Seventh Room, The Blue Cone, and The Dragonfly. You’ll have to splurge in order to spend a night in one of the rooms, but you’ll hardly regret it. Star Wars fans should certainly stay in the UFO. The room accommodates up to five people. Imagine waking up in the wild and harsh northern outdoors in a treehouse resembling a flying saucer—what else do children (and some adults) need to be happy?

Just book a room in advance, as it’s not surprising that rooms here fly away like comets.

The Hotel Pelirocco is a boutique hotel located in the south of England just two minutes from the beach. Each room represents a different musical style: for example, disco, country, or punk. There’s also a room dedicated to the immortal Star Wars saga. In Lord Vader’s Quarters, everything is very simple, just like inside the Death Star, only it’s brighter and more comfortable with photographs of the main characters and space weapons hanging on the walls. In the summer, the British themselves are happy to book rooms here. After all, they want to seize the moment to swim and tan after all the dank and cold weather.

If you think that theme hotels are for preschool and younger school-aged children, get this nonsense out of your head. There are Star Wars fans of all ages, so enjoy your journey, and may the Force be with you!