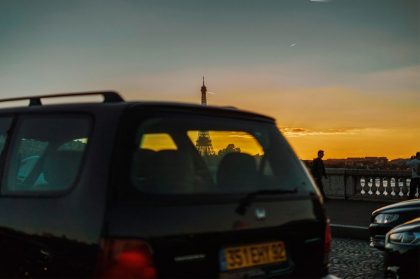 Nine Things You Should Not Do in Paris

It’s possible to see Paris and die, the main thing is not to die of shame. The locals have already been writing stories about typical tourists in the capital of France. We will tell you how you should not behave in Paris so you won’t make a faux pas and won’t be taken for a boor.

Eat breakfast in a café

What do the French eat for breakfast? Only coffee. Eating breakfast is not common practice in France. The famous French breakfast is just a myth created for tourists in order to make an extra 10 euros off of each person early in the morning. Don’t think that you have to change your diet, but keep in mind that all the cafés that serve breakfast belong to Americans and good French restaurants are closed in the mornings. If you want to feel like a real Parisian, you can have breakfast at your hotel or apartment (behind closed doors so that no one can see) and then sit outside for half an hour with a cup of coffee on some veranda.

Take a taxi in the city

First of all, the yellow car is a symbol of New York not Paris. Secondly, the area of Paris is 10 times smaller than the “Big Apple” and this is not a figure of speech, it’s really 10 times smaller. Taking its developed infrastructure into account, it’s very hard to find a route that is not covered by the city’s transportation network. You can go on the bus to areas the metro doesn’t go to. For areas the bus doesn’t go to, you can travel to by bicycle (we recommend velib — the local bicycle rental chain, a full day rental is 5 euros). If you still can’t get rid of your urge to take a taxi, feel free to hop into a car. The hour-long traffic jams on the roads will quickly bring you to your senses.

In French, there is the set phrase “un quart d’heure de politesse” (a polite 15 minutes). In France, and especially in Paris, it’s not polite to arrive on time. Especially when you are invited to someone’s home. If you arrive at the specified time, the host will most likely meet you wearing an apron and house shorts and a look of displeasure because they were planning on changing clothes during the last 15 minutes. These exact 15 minutes which you, as a decent person, were supposed to be late by. The same thing applies to meetings in cafés, including business meetings—you don’t want to hurt your colleague with your punctuality. Parisians have a very special sense of time and it is almost impossible to predict the personal time zone of your acquaintance, friend, or colleague. Once I was honestly half an hour late for a birthday party and nevertheless I arrived before the birthday person. Yes, France is full of anecdotes about the eternally rushing Parisians, but they are in a hurry, apparently, not to arrive on time, but to be late not by 40, but at least by 30 minutes.

Don’t try to force yourself to leave proper tips for the eternally rude Parisian waiters. That’s not how you pay proper respect to etiquette. If in New York it’s customary to leave tips of 10 to 20% in restaurants, then the French will give a little tip for tea regardless of the amount of the bill.

Stroll or shop along the Champs-Élysées

A self-respecting Parisian would even refuse to explain this point of advice. Thanks to Joe Dassin’s song, “in the sun, in the rain, at noon or at midnight” the Champs-Élysées is the most crowded place in Paris. Moreover, the main habitués of the “most beautiful avenue in the world” are pickpockets.

The Champs-Élysées will change your opinion about the famous French flânerie—aimlessly sauntering along the boulevards. To be a flâneur here means to maneuver your way between crowds of tourists, swindlers, and cafés with prices that are three times as high as normal. As for the stores (the reason why people who are not on a pilgrimage to the places associated with writer Marcel Proust and who are not looking for prototypes of paintings by Blanchard flock here), if you are going to do some shopping, don’t forget to set aside an hour and a half in line for the fitting room and an hour and a half for the cash register.

Fans of Jean-Sol Partre, Master Hem, and the French New Wave film movement will surely plan to have a quick drink at the Café de Flore or Les Deux Magots. If you are one of them, bear in mind that the spirit of Bohemian Paris already began to disappear from these places at the hundredth click of a camera—yours will be the millionth. Besides this, the increase in coffee prices is unfortunately inversely proportional to the decline in authenticity. By the way, the same applies to the ‘Renoiresque’ Le Moulin de la Galette and Le Café des Deux Moulins, where Amélie Poulain herself cleaned the tables. If you still want to go to one of the legendary Parisian cafés, we advise you to choose a less well-known one such as Brasserie Lipp, which has an equally impressive list of regulars (Verlaine, Camus, and Mitterrand). Another option is La Coupole, the former mecca of the surrealist painters and the scene of the boisterous intellectual life of the 1930s, with its marvelous art deco interior that was recognized as a historical monument of France.

The world-famous Parisian chic requires a bit of carelessness: an unironed shirt, disheveled hair, and unconcealed dark shadows under the eyes. Parisians are never too dressed up or too tidy. Even if a girl spent an hour and a half getting ready for a date, she will look as if she put on the first t-shirt she came across in her closet and forget to comb her hair before leaving. If you go to a social event or to a good restaurant, do not forget to accidentally leave out some important detail: if you wear a suit and a dress shirt then go without a tie, if you wear an elegant dress you should go without heels, otherwise your tablemates might think that you were not fed enough at a wedding and you ran to a restaurant.

Yes, it’s true that a salesperson in a store will greet you warm-heartedly and wish you a good day. But you should not be too complimentary in return and you should not be interested in which school his children go to and what his favorite Édith Piaf song is. The threshold of politeness in France is very different from the English and American threshold. Parisians are very suspicious of smiling people and avoid visual contact with strangers (we especially advise you against trying to establish visual contact in the metro). It’s perfectly normal to kiss half of Paris, but an embrace is an unacceptable level of intimacy. An embrace is only acceptable if you know each other for several decades, you have children together, or you made it through the war shoulder to shoulder. When you meet or become acquainted with someone you should kiss the stranger twice (twice, not thrice!); this ritual is in fact absolutely harmless; you can boldly kiss the air, creating an illusion of a bise (French for ‘kiss’).

The French are very scrupulous about the unspoken rules of etiquette and there are legends going around about Parisian snobbery. Parisians will unceremoniously call you a paysan (peasant) for the most inoffensive faults: you bought a baguette in a store and not in a bakery—you’re a paysan, you wait until the red light changes to green before crossing the street—you’re a paysan, and so on.

Heaven forbid that instead of enjoying the panoramic view of the city from the Parc des Buttes-Chaumont or on the Montparnasse Tower you spend many hours in the line-up for the Eiffel Tower. However, the main tourist trap, needless to say, is not falling victim to the condemnation of the Parisians, but to miss seeing the living life of the city that exists behind the fixed way, wandering from one tour guide to the next. Bon Voyage!