Seven of the World’s Most Beautiful Rail Journeys

We’ve pulled together for you seven of the world’s most scenic rail routes, so all aboard for a relaxing trip and to admire the scenery of many different countries.

Japan is known not only for its robots but also for its ultramodern fleet of high-speed trains, which help you get from city to city quickly and comfortably. For leisure travelers, though, there is another way to see the country. On the list of Japan’s prettiest rail routes is the line which joins the prefectures of Aomori and Akita and which runs for 147km along the Gonō Line in the north of the country. This route is best suited to travellers who are not in a hurry and who want to take in the scenery as the trains stop at all 43 stations as the train snakes around the coast of the Sea of Japan via the Shirakami Mountains (a UNESCO World Heritage Site) and the Senjojiki rock plateau and its fantastic sunsets over the sea.

The train carriages are along typical Japanese lines, with viewing cars where you can enjoy the view while seated at panoramic windows. They serve light snacks, and there is live music.

Given that this train only runs from March to September, you need to make sure you plan your trip to Japan at the right time of year. To help with this and what else to do in a week in Japan, see our article here.

Mexican passenger trains were done away with in the 1980s when bus travel became the country’s most accessible and quickest means of public transport. However, one route remains, and it is the only passenger train route left in the whole of Mexico.

Quite modern trains run between the two cities of Los Mochis and Chihuahua on the country’s western coastline, passing via the Copper Canyon, a surprisingly mountainous formation which consists of five canyons covering an area greater than the Grand Canyon in the USA.

There are two trains: a second-class and a first-class. The second-class train runs every other day, and the first-class train, which costs $70.00 more, runs every day, so leisure travellers tend to often pay the higher price for the convenience. You can cover the 673km distance in under 24 hours, but it’s worth stopping off a couple of times en route to better experience the country and take in the sights.

Amongst some of the most interesting places are the small town of Creel with its rocky formations in the Valle de los Monjes, the hot springs at Recowata, Lake Arareco, and a guided tour to the Aborigine settlement of Tarahumara (price: 200 pesos).

Another popular place is Divisadero where you can take a ride on a funicular (price: 175 pesos) up to enjoy views over the Copper Canyon and then stay the night in the village of Bahuichivo and visit the village of Cerocahui and its free Mirador Cerro Del Gallego Chihuahua viewing platform from which you get a panoramic view over the Urique Canyon, the deepest in the region.

A journey on Australia’s Ghan train should definitely be on anyone’s travel bucket list. This railway was opened in 1928 when Australia was still part of the British Empire. Until 2004, the line only reached Alice Springs, in the center of the continent, but for the past 15 years, it has been possible to cross the whole of Australia right up to its northernmost point. The route passes through the green hills and vineyards of South Australia, the orange-brown deserts of the central region, and the bright tropical zones in the north. On route, you also have the chance to see popular but sparsely populated small towns like Alice Springs and Katherine. At each stop, you can take part in free mini-tours to interesting locations.

The ticket price gets you a super little compartment with private facilities and shower and three good meals a day with Australian wine and other types of alcohol.

Buying tickets in other countries

Most countries with developed railway networks offer different types of rail pass, which allow you virtually unlimited travel for a certain number of days or weeks and can save you a lot of money. For instance, the Japanese version is called the JR Pass and is only available to tourists at prices which the locals can only dream of. You can use this to travel all over the country on almost any train, including the Tokyo airport express. This pass costs 29110 yen for seven days and 46390 for 14 days. Given how expensive Japan is as a country, this will save you a fortune on transport costs if you want to get the most out of seeing as much of the country as possible.

Passes in other countries:

This route, which extends across the Swiss Alps, is justifiably considered one of the most picturesque in the world. It runs between the two popular ski resorts of St Moritz and Zermatt, but the train itself is so popular in summer thanks to its views of the valleys and nature reserves it runs through. 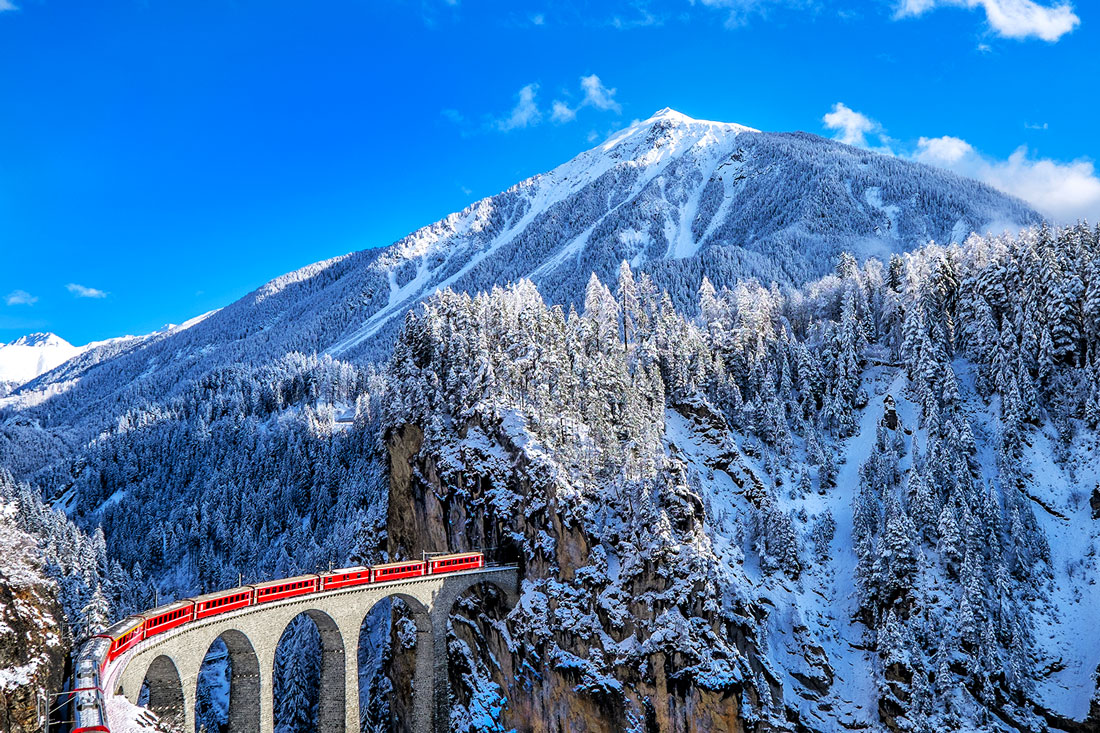 The train offers first- and second-class seats. Either is comfortable, and you will enjoy your journey through the Grisons nature park – somewhere you can only get to by train. You will have spectacular views of pristine lakes and the canton of Valais, views straight from a picture postcard.

This train has excellent panoramic windows affording superb Alpine views. A three-course meal with drinks is available for 43 francs.

The route taken by the California Zephyr is considered one of the most impressive in the world and one of the most accessible. For only $139.00, you travel almost 4000km in 3 days and two nights (it might cost more depending on season and class traveled).

The train runs between the two American megapolises of Chicago and San Francisco passing through the Rocky Mountain states, the emptiness of Utah and Nevada, the snowy peaks of the Sierra Nevada, and the Californian coastline at San Francisco. Having taken this journey, you will be able to say with certainty that you have seen parts of America that even most Americans haven’t seen. This double-decker train has a carriage (“sightseer lounge”) specially equipped with seats that are turned to face the panoramic window. This car is accessible to all travelers.

The class of travel dictates whether you can a seat or a small sleeping compartment with private facilities. The seats are quite large and recline for sleeping. Food is included when you book a sleeping compartment, but you have to pay for food if you book seat-only. The food is not too ex[pensive at $9.00-$12.00 per person per meal.

This is the most luxurious entry in our collection. The Royal Scotsman can be compared to a fabulous 5-star hotel thanks to its high levels of service (and fantastic views of Scotland). Thirty-six guests are accommodated in 9 carriages looked after by 12 members of staff. The price includes meals, all drinks (incl alcoholic), and tours during stops in the various picturesque towns and villages along the way, like the white sandy beaches at Morar Sands or the 16th century Ballindalloch Castle. Even the train itself is decorated in the purely British, vintage style of the early 20th century, on top of which you will be greeted by a kilted bagpiper on the platform of the station at Edinburgh.

The route taken is via the most remote, mountainous areas in Scotland, through the Highlands, places inaccessible by car. The most picturesque section crosses the Firth of Forth on the Forth Bridge, and one of the most interesting tours is to taste the whiskey at Glen Ord Distillery, where you get to taste some of the finest whiskeys Scotland has to offer. There’s no better way to spend a few days getting to know a large part of this country.

Even Russia is in on the luxury rail travel game. The Golden Eagle travels between Moscow and Vladivostok or Beijing and back to Moscow over 15 days with stops and guided tours in such places as Kazan, Ekaterinburg, Novosibirsk, Irkutsk and Lake Baikal, and Ulan-Ude. The $16,700 price tag for such an adventure is down to the fact it only travels at a certain time of the year and only on request by non-Russian leisure groups.

Apart from the luxurious, royally appointed sleeping accommodation, the train boasts a beauty salon, massage facilities, and even a gym. All food and drink (including alcohol) are included in the price and a personal guide for the two-day tour of Moscow, excursions to Baikal, Irkutsk, Ulan-Ude, Ulaanbaatar and Vladivostok. These are two weeks of full immersion into Russian and Mongolian cultures and traditions.

More and more people are flying nowadays, leaving rail travel in the “maybe another time” bracket. This is a shame since rail travel, far from the busy highways and the hustle and bustle of the cities, really gives you time to pause for thought and enjoy and admire the beauty of nature.