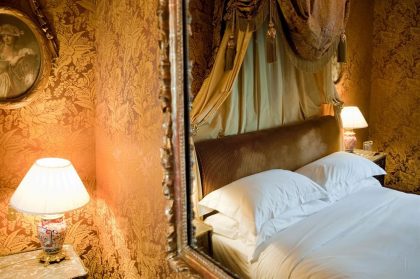 Six Hotels with a Tragic Past

Many journalists are sensation seekers, mad fantasists, relentlessly seeking the secrets behind the death of their idols. Some hotels had their reputations destroyed by what went on in them, while for some others, their reputations, however challenging, worked in their favour, firmly anchoring their names in history. Much has been speculated about what happened to Janis Joplin and Jimi Hendrix in their hotel rooms, but we can only guess at what really happened in those halcyon days of rock and roll – and of course there are dozens of extravagant conspiracy theories to back up any of the claims which are made. In this piece we will take a look at some of those well-known names whose lives were cut short in hotel rooms throughout the world.

Richard Wagner was the great 19th century opera reformer. After the huge success of his mysterious work Parsifal at the Bayreuth Festival, Wagner set off for Italy to rest and address some health issues. The very next year, the composer died of а heart attack in his room at the Ca’Vendramin Calergi hotel in Venice. Nowadays the Ca’Vendramin Calergi building houses the Casinò di Venezia and the Wagner Museum. You can’t stay there anymore, but you can take a room in the nearby Ca’Vendramin di Santa Fosca hotel, which itself has a rich history and sumptuous 17th century original interiors. All the typical features you’d expect of the classical Venetian style are to be found here – frescoes and carvings on the ceilings, chandeliers made of Murano glass spreading warm shades of light throughout, and omnipresent swirling forms in gold leaf. Not surprisingly, such a setting has always attracted merchants, bankers and Bohemian types from all over the globe.

See the rooms in Ca’Vendramin Calergi.

Rigid Victorian morality spared no-one. In those days, all alternative ways of living were seriously frowned upon throughout society and could sometimes lead to legal action and criminal convictions. In Victorian times, the gay community was cruelly oppressed; they were often found guilty of immorality and were sentenced to time in prison or forced to undergo sinister psychiatric treatments in mental hospitals where torture was used to try and force them to turn away from their natural instincts. The law in the UK at the time didn’t spare Oscar Wilde either. The playwright was tried and found guilty and sentenced to a spell in prison because he had been in a relationship with Lord Alfred Douglas. After his release in May 1897, Wilde fled to France, where he wrote the Ballad of Reading Gaol. Shortly before his death, he checked in to the downmarket Hôtel d’Alsace in the Latin Quarter of Paris. Wilde, ever the aesthete, despaired of the shabby room he was forced to live in and for which he could not afford to pay. Sensing his impending demise, Wilde ordered himself a bottle of the most expensive champagne in the hotel and declared, somewhat ironically, “Alas, I am dying beyond my means.” He was taken by acute meningitis in November 1900. The hotel is now called simply L’Hôtel. The great writer’s death was turned into good publicity for the property. Now the hotel offers high-end splendour with its quirky Baroque-style rooms, where silk curtains and antique vases are tucked away in carved recesses, giving the impression that you’re either there as an ancestor of some kind of Parisian aristocrat, or a successful nouveau-riche arriviste. The hotel restaurant boasts a Michelin star and looks as if it were built specifically for society gossip and flirting. Where else to flaunt your charm than in the Latin Quarter around St Germain?

A double room in L’Hotel costs from US$410 per night. See the rooms.

The Second World War forced Nikola Tesla to move to New York City. The occupation of his native Serbia hit him badly and he turned to his fellow Slavs with appeals for unity. Shortly before his death he met up with his nephew, the Yugoslav ambassador Sava Kosanovič. The latter informed Tesla that US First Lady Eleanor Roosevelt had requested a meeting with him, but this meeting never took place. Tesla died during the night of 7-8 January 1943. His body was discovered two days later. The inventor preferred isolation and insisted that people did not come and visit him unless absolutely necessary – and he lived in a suite at the Hotel New Yorker for 10 years! The hotel interior simply screams comfort – no-one has sleepless nights in a Hotel New Yorker bed, the interior colour scheme is an unobtrusive café-crème (real coffee is simply brought to your room) – and in the mornings, the view out of the window almost makes you want to smile and sing Frank Sinatra’s New York, New York over Manhattan at the top of your voice.

A double room in Hotel New Yorker costs from US$169 per night. See the rooms.

Coco Chanel beat even Nikola Tesla in how many years she lived in a hotel: 37 years at the Paris Ritz, a place she considered her true home. This hotel has always been indecently luxurious with its antique furniture, acute attention to detail and highly trained staff. In her apartment, Coco Chanel had two bedrooms, a living room and two bathrooms at her disposal. The diva herself took personal charge of the decor – Asian lacquer, gold-framed mirrors and the contrast of black against white. She lived a long and rich life, dying aged 87 in her own room at the Ritz. The word “Ritz” has long been a byword and synonym for the highest service standards and refined taste. Apart from Coco Chanel, Marcel Proust, Charlie Chaplin, Greta Garbo and Marlene Dietrich also stayed there. In honour of these famous guests the hotel has taken to naming the most expensive rooms after them – and the bar at the Ritz is named after Ernest Hemingway. The interiors are reminiscent of the rooms of a royal palace turned museum, but instead of a home for the royals, anyone can stay – a true night at the Museum.

See the rooms in Ritz Paris.

The talented and charming Whitney Houston became a true megastar after the release of the blockbuster movie The Bodyguard in which she not only played the starring role but immortalised the poignant Dolly Parton ballad I Will Always Love You. Whitney Houston’s voice won over millions of people and in some ways the film was prophetic in that, for the rest of her life, the singer lived in the constant gaze of the paparazzi, her fans and critics. On 11th February 2012 Whitney Houston was found dead in her room at the Beverley Hilton, on the eve of the 54th Grammy awards. The cause of death was recorded as arteriosclerosis and cocaine abuse. The suburb of Beverley Hills has been home to movie making and the setting for novels and TV serials for a long time now. The Beverly Hilton is almost like the soul of Los Angeles – huge king-size beds, the rooms decorated in warm peach and beige tones, and giant windows letting in lots of sunlight – just as things are supposed to be in California. Spend a bit of time there and one evening take a car out to the Pacific Coast.

A double room in The Beverly Hills costs from US$485 per night. See the rooms.

2018 got off to a sad start with the announcement of the premature death of Cranberries vocalist Dolores O’Riordan. Her captivating tones had been enjoyed by millions of people since the 1990s. O’Riordan died aged 46 at the Hilton Park Lane in London. As yet, no cause of death has been made public by the investigation or by the singer’s friends and family. The five-star Hilton Park Lane is, as its name suggests, part of the Hilton chain. The Michelin starred restaurant Galvin at Windows is located here, as is Trader Vic’s with unique Polynesian cuisine and the Podium bar and restaurant where seasonal British dishes are on the menu and five o’clock is still regarded as an almost religious event. It’s the kind of hotel in which you want to spend as much time as possible given its interiors decorated in a kind of reserved British style featuring vegetable prints and floral designs mixed in amongst the real thing. The hotel is surrounded by parks with the famous Hyde Park to the west and Green Park to the south.

A double room in London Hilton on Park Lane costs from US$300 per night. See the rooms.

Tragic and mysterious events seem to attract travellers from all corners of the globe. Hoteliers reluctantly draw on the better known aspects of the famous person’s passing as they are also aware of its marketing pull – they name rooms after them, put up memorial plaques, and tell first time visitors the stories and legends about those guests who came before them.