Ten Things You Should Avoid Doing in Singapore

“Singapore is a fine city” can be understood in two ways… either as a great place to visit or one where you risk being charged penalties for stepping out of line. Both descriptions are quite valid, though you don’t need to fear a large number of “forbidden” signs.

You just have to prepare smartly for the journey, in which case, as soon as you leave the airport, you will come across a unique city that will strike you with its architecture, landscapes, cosmopolitanism, and character. So to help you avoid thousand-dollar-plus fines and merely gain pleasure from your trip, we tell you what you definitely shouldn’t do in Singapore.

Don’t even think of bringing it with you. Yes, it sounds funny, but it won’t be in the least funny when they issue you with a $S 1,000 fine.

The city authorities have made a huge effort to clean it up, and chewing gum is the main and longest enemy of Singaporeans’ sterility. The only effective solution to stopping people from throwing it onto the road was to ban its sale, import, and consumption. But there is good news: the cash desks in shops are equipped with lots of shelves bearing sweets, including the kind of chews that you can swallow.

Smoking in places not assigned for it

They exact cruelty on smokers in every possible way in order to deprive them of the pleasure of their damaging habit, yet smokers never give up. In places in Europe, you may still be forgiven for miscalculating the number of meters from the building, but in Singapore, you get no such leeway. If you don’t have $S 1,000 that you don’t need, then follow the green bins — these mark the only places where you are allowed to smoke. And don’t follow the example of the brave locals who calmly puff on the cafe veranda. They will definitely have been warned by the staff, “You smoke at your own risk.”

Moreover, you are not allowed to import more than 19 cigarettes, and you have to declare them with customs as you arrive and carry a receipt for customs payment wherever you go. That will cost you around $S 12. So it’s quicker and safer to buy local products. Be ready to part with $S 14.95 per pack. Oh, and while I’ve been writing this text, the price has probably gone up again…

Basically, if you’ve been long planning to get rid of your nasty habits, then this is just the right city for you to visit.

Set your eyes on somebody else’s property

At first, you should note that Singapore is based on feng shui. If in our country the foreman is the key guy on the building site, then in this country it’s the feng shui master. Buildings are designed to take account of the sides of light and location of the stars, and even trees are planted in a particular order and place. Singaporeans believe that this is the secret to wellbeing and prosperity. Therefore, they are particularly jealous of the city’s property. And we understand this: you are of course unlikely to carry a spray canister with you to paint graffiti (which is also banned), but you are also not allowed to pick the flowers, walk on the lawns, drop trash on the ground, feed the pigeons, spit on the ground or even forget to clear up after yourself. For any of these deviances, you may be fined a hefty $S 300 to $S 1,000.

Eat-in a cafe or restaurant

Singapore’s tastiest food is also its cheapest. Seriously. And it’s great that you don’t have to stray far to find it: rather, you will come across food markets just about everywhere. The biggest and best known is Newtown Food Centre, located at 500 Clemenceau Avenue North.

It’s particularly cool if you’re into seafood — its quantity here will take your breath away. Make sure to order crab in chili sauce or stingray in sambal sauce, if you like it spicy. Seafood is sold by the weight, with prices varying from $S 15 to $S 30 per kilo. Insist that they weigh the food in front of you and check that the numbers on the scales match the amount on the receipt. It’s also worth trying the meat on skewers costing $S 0.60 per piece, as well as the very generous portions of shrimps in noodles for $S 5. There are also lots of treats to be found at the Suntec Food Republic.

Apart from the aromatic Asian soups, you will be attracted by the tremendously tasty frozen yogurt costing $S 4. At all food-courts, try the stalls which display an A or B rating. Sometimes these ratings are additionally highlighted in green or yellow. This means that the produce there is fresh and the dishes are of high quality. In little Ya Kun Kaya Toast eateries, you can try the traditional breakfast — soft-boiled eggs with peanut butter on toast and coffee. This snack will set you back around $S 5. 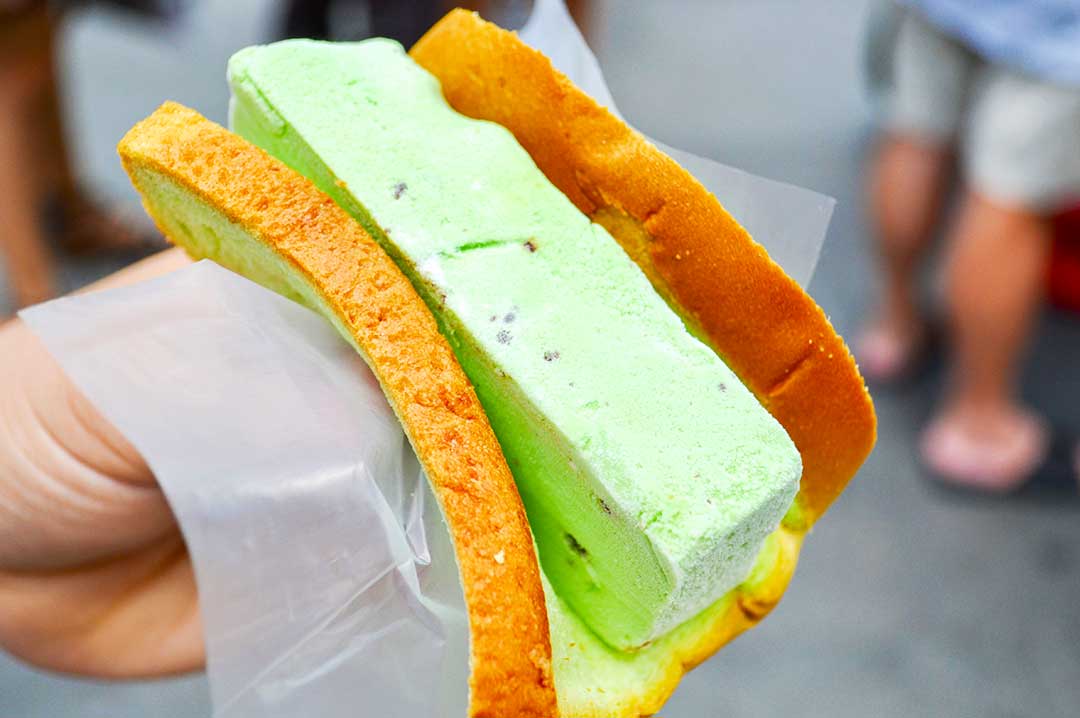 If you’re into fresh fruit, then head to the main market on Bugis St. Here for just $S 1, you can try ice-cream in bread, the local desert.

Singaporeans are a very reserved nation and will be quite unlikely to kick up a fuss because somebody has pushed in front of them. Nevertheless, even though they stick to a philosophy “it that’s what the person’s done, then they really needed to do it,” and they might even try to persuade you to stay in front of them, you really mustn’t do this. The locals take a serious view of the rules of etiquette and believe that you should respect others and not hinder anybody else.

For many years, thanking waiters in this way was punished by law, but the presence of such a large number of tourists has made law enforcement physically impossible. Many establishments have made an effort to ensure their staff aren’t short-changed in this way, by adding a 10% service charge to the bill. Bear this in mind and calculate straight away how much the bill will come to, so you don’t find yourself facing unexpected expenses. Singapore is a very cosmopolitan city, and its combination of East and West is found in everything. As a minimum, the neighboring location of districts with people of different confessions is telling. And although the climate here is very hot and humid, it’s best to observe eastern dress traditions. Shoulders should be covered, and preferably knees as well.

No matter how strange it may sound, nobody will fine you for wearing hot pants or a low cut top, but if a neighbor notices any of your privates in the window, you can expect a knock on the door. Singaporeans take a dim view of encouraging sexuality or violence, so walking around showing too much skin and even watching adult films is banned. Pull-on your shorts in your hotel room to avoid a $S 2,000 fine or even three-month prison sentence for your beautiful body. Inside buildings, by contrast, it’s fairly cool — air conditioning works at full power. Given such a contrast in temperature, it’s easy to get frozen in a shopping center or the subway. So it’s a good idea to carry a palatine scarf or cardigan with you.

So switch to public transport. The cheapest way to buy tickets is in the 7-Eleven shops for $S 10, of which $S 5 is the cost of the card. And don’t rush to be upset, as this card can be used up to six times. And there is good news for fans of discounts! Using the same card type, you will get a reduction of 10% for your next journey.

If you can’t find one of those shops nearby, then the same ticket will cost $S 12 at the station.

You will immediately notice how clean the subway trains and bus seats are. Thanks to the ban on eating and drinking on public transport, Singapore manages to maintain cleanliness in such unhygienic spaces. It’s also inadvisable to carry takeaway meals with you, as passengers might complain about the smell. And if you accidentally drop what you are carrying in your bags, that will simply add to your problems. Remember that the exotic fruit durian can only be eaten in those places where it is for sale, and you are not allowed to bring it on public transport.

Connecting to some neighbor’s insecure network here is treated as hacking and may end in a three-month prison stay. But don’t be frightened: everywhere in the city, you will find access to free Wi-Fi, and not only in the hotel and public spaces. And you can also connect to networks signed “Free Wi-Fi,” but make sure that it requires either a password or your registration.

Despite Singapore’s advanced technology and modernity, it’s strange to acknowledge that not everybody here has heard of Apple or Google Pay. At nearly all food markets, markets selling electronic goods and souvenirs, as well as in little shops, only pretty Singaporean banknotes are accepted.

If you find yourself short in some district, there will almost certainly be a dozen or so ATMs and currency exchange points nearby, so this shouldn’t be a big problem.

All of the above might sound like a lecture from your mother. However, by heeding the basic recommendations, you will gain more pleasure from your stay. Moreover, this city disciplines you so much that you will quickly get used to these new rules and wonder how you managed to live without them for so long.