Chalets, Riads, and Pop-up Hotels: The Most Unusual Accommodation Options

In the 21st century, you can book almost anything: capsules and underwater hotels, chalets and old mansions, botels and glampings.

Some of these accommodations have become integrated into our culture from other countries, while others have existed for centuries and attract travelers with their authenticity. We compiled a list of the most unusual types of accommodation around the world and figured out what exactly they are.

What it is: the lodge is the characteristic term for hotels in African countries. Botswana is considered to be the homeland of lodges. Lodges differ from classic hotels in their location. Simply stated, these are ethnic-style hotels that are integrated into nature but are not devoid of all the amenities of civilization. They may be located in nature reserves and national parks, in forests and valleys, but their convenience, functionality, infrastructure, and service are at the same level as five-star boutique hotels. The lodge is the characteristic term for hotels in African countries.

What it is: a botel (boat + hotel) is a boat that serves as a hotel or a hostel. In other words, a floating hotel.

Botels may be large or small, specially built for sleeping and resting in, or they may be retrofitted water vessels. As a rule, botels are moored at specific places, but they can also move about and make sea or river tours.

For example: perhaps the most famous one is Botel in Amsterdam, which looks more like a cruise ship from the side. Botel is moored at the NDSM wharf. A botel (boat + hotel) is a boat that serves as a hotel or a hostel.

What it is: capsules are small sleeping boxes measuring 2×1×1.25 meters. They are notable for their compactness and considered to be a budget option. They are popular in Japan. The traveler’s luggage is stored under the capsule or on specially assigned shelves in the dormitory.

History: The first capsule hotel – Capsule Inn Osaka appeared in the Umeda district of Osaka in 1979. It’s widely believed that initially this type of residence was popular among office workers who took a long time to get home from work and drunken revelers who did not want to be seen by their relatives in this condition. The concept caught on because capsules are not only about compactness, but also about saving space.

Remember that Japan is one of the countries with the most expensive real estate in the world. According to Statista, in 2021, a square meter in Tokyo costs almost $10,000. The first capsule hotel – Capsule Inn Osaka appeared in the Umeda district of Osaka in 1979.

An example: MyCUBE by MYSTAYS Asakusa Kuramae in Tokyo. Guests are provided with all the essentials: slippers, earplugs, toothbrushes, toothpaste, creams, gels, shampoos, and even pajamas. Dormitories for men and women are located on different floors and can be locked using individual keys.

The plus side of this accommodation option is its low price. The downside is the lack of natural light: there are no windows in the capsule. Due to the abrupt change in time zones, it takes several days for the human organism to understand when it is day and when it is night. We can’t recommend this type of accommodation to people who have claustrophobia. Guests of MyCUBE by MYSTAYS Asakusa Kuramae are provided with all the essentials.

What it is: glamping (glamorous camping) is camping with everything you need for a comfortable stay. Modern glampings involve a combination of technologies and simple solutions. The usual modern comforts, such as a bed, a heated floor, and Internet access await guests under the dome of a fabric tent or in a cottage, but outside they are surrounded by nature and even animals.

History: The word “glamping” first appeared in the UK in 2005 and was added to the Oxford Dictionary in 2016.

This concept was used in the Middle Ages: when kings and counts went away on nature expeditions, luxurious domed tents with items from the palace were set up for them so their Majesty did not feel any hardship and discomfort, even when far away from home. Glamping (glamorous camping) is camping with everything you need for a comfortable stay.

At the beginning of the 20th century, hunters from Great Britain and North America went on this type of vacation while on safaris in Africa. Most often, the typical site for glamping was a safari tent set up on top of a wooden platform. Since 2010, glamping has been actively developing around the world.

For example: Turkdomes is a new glamping located on the Lycian Way (a long-distance hiking trail in Turkey). It consists of several yurts with all the amenities. This glamping has many attractive features, such as hammocks that you can lay on to sunbathe or admire the starry sky, hot tubs, swings, and a sun terrace featuring a panoramic view of the mountains and the sea. Both the electricity and hot water run on solar panels. Guests are served home-style breakfasts and dinners. 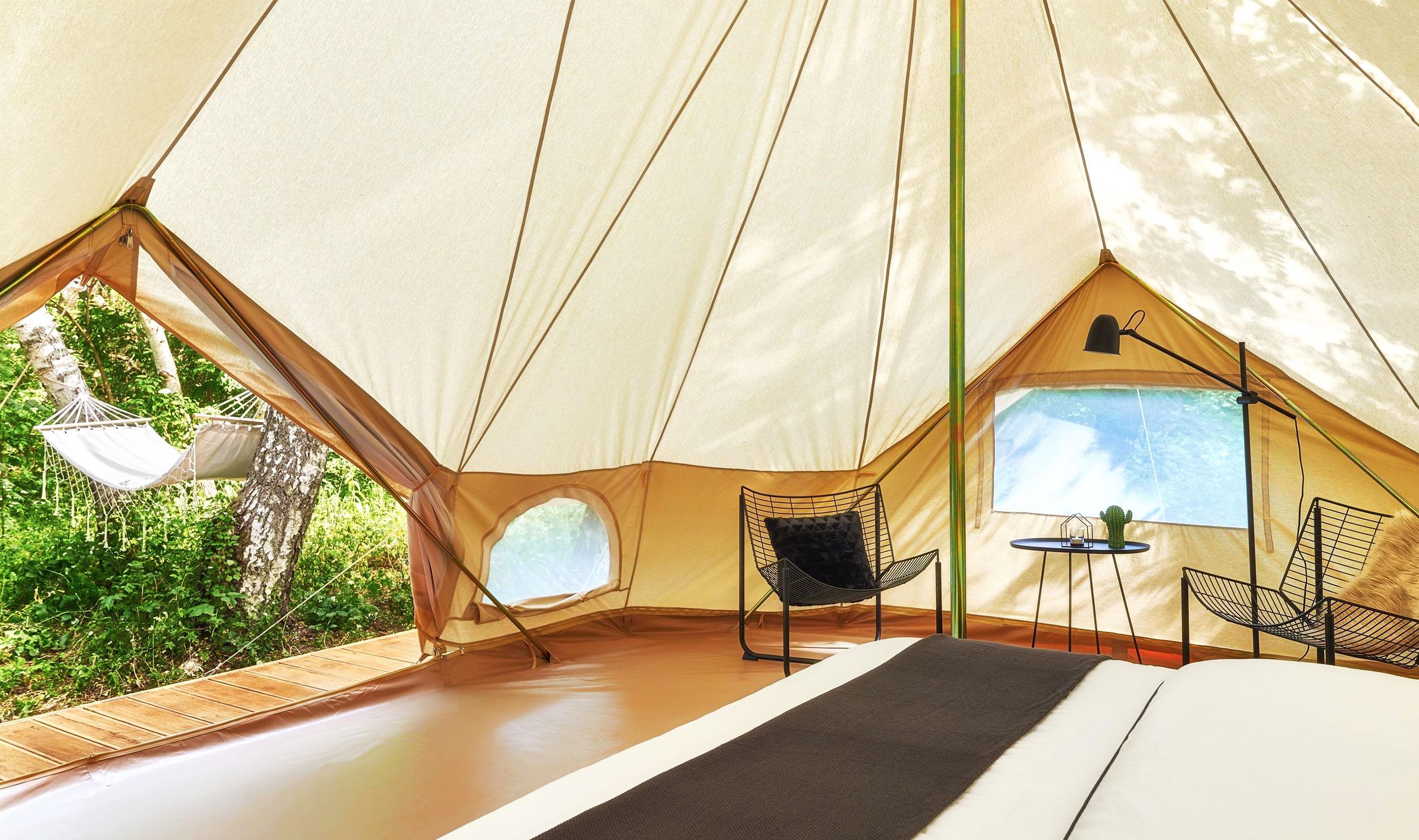 Modern glampings involve a combination of technologies and simple solutions.

What it is: a chalet is an Alpine cottage and a popular accommodation option in Austria and France. It’s true that in modern times you don’t have to travel to the Alps to stay in a chalet.

History: the word “chalet” originally meant “shelter of the shepherd”. At one time, it was shepherds, not millionaires, who lived in rural wooden cottages on Alpine meadows. During the 19th century, the European nobility became more interested in the traditional wooden houses in the Swiss Alps. With the development of tourism, chalets began to be perceived as vacation homes, most notably in the Alpine regions.

For example: it’s possible to rent a chalet-style cottage almost anywhere, for instance, the Chalet Nyati in Switzerland. It’s true that in modern times you don’t have to travel to the Alps to stay in a chalet.

What it is: an eco hotel is a hotel that has undergone important changes to become more sustainable and minimize its effect on the natural environment. Green hotels follow strict requirements to guarantee that guests are accommodated in safe, non-toxic, and energy-efficient rooms.

As a rule, most eco hotels feature:

For example: the first environmentally-certified hotel on the Iberian Peninsula was Jardim Atlântico on the Portuguese island of Madeira. The first environmentally-certified hotel on the Iberian Peninsula was Jardim Atlântico on the Portuguese island of Madeira.

What it is: a pop-up hotel is a temporary hotel erected at a certain place for a specific period of time. These hotels may be built from pre-fabricated modules or from collapsible structures. They can also be totally mobile. Pop-up hotels are frequently used as accommodation during seasonal events, such as major music festivals or sporting events.

The pop-up hotel trend is part of the hospitality industry’s global approach to create authentic, local, and transient experiences.

For example: Marriott Hotels & Resorts has partnered with the Coachella Valley Music and Arts Festival to offer stylish rooms during the festival.

Snoozebox is a pop-up hotel brand that can be found at festivals in the UK. A pop-up hotel is a temporary hotel erected at a certain place for a specific period of time.

IceHotel opened in Sweden in 1989. Since then, it has been constructed annually out of snow and ice blocks from the Torne River. It’s a museum during the day, and becomes a hotel in the evenings. With the onset of winter, local artists create ice “rooms” where you can stay from December through April.

The London-based company Black Tomato offers its clients the service of creating a pop-up hotel anywhere they want (the cost of this service starts from $20,000).

In January 2020, Nutella opened a pop-up hotel in Napa Valley with rooms featuring pillows shaped like jars of the famous chocolate spread. IceHotel opened in Sweden in 1989, since then, it has been constructed annually out of snow and ice blocks from the Torne River.

What it is: micro hotels are hotels with compact rooms, in which you will find everything you need for a comfortable stay. Micro hotels are similar to capsule hotels in their small size, but unlike the capsules, the rooms in micro hotels are not devoid of privacy. Their basic purpose is to provide a place to rest between flights or during a short stay in the city.

For example: they can be found all around the world, for instance, in Hong Kong (Micro Hotel), Switzerland (CitizenM) and London (easyHotel). Micro hotels are hotels with compact rooms, in which you will find everything you need for a comfortable stay.

What it is: a riad is a traditional Moroccan-style house. It is an authentic building consisting of several floors with an interior courtyard or a fountain in the middle of a garden. In Morocco, this is what a hotel or guest house with common areas and private rooms are called. They are often located in restored traditional mansions.

In recent years, more people have become interested in traditional Moroccan houses. Some of the buildings in Marrakesh, Essaouira, and Fez have been renovated and converted into authentic riads. A riad is an authentic building consisting of several floors with an interior courtyard or a fountain in the middle of a garden.

History: riad means “garden” in Arabic. Historically, this term referred to a type of interior garden common to Moorish architecture in Al-Andalus and North Africa. All riads have a rectangular garden in an interior courtyard that is symmetrically divided into four parts along its central axes with a fountain at its middle.

Interior gardens were a popular feature of palace architecture in the Islamic world because water and greenery were associated with images of paradise in Islam. The walls of riads could be decorated with Moroccan tadelakt plaster, stuccowork, and zellij tiles, and sometimes with Arabic calligraphy and quotes from the Quran. Traditional riads often had central gardens planted with fruit trees such as orange or lemon trees. Traditional ryokans can be found everywhere in Japan, in both the scenic rural areas as well as in large cities. An authentic ryokan has an entrance hall with couches and chairs. In a modern ryokan, there is also a television in the hall. Each room has a futon (a thick cotton mattress) on top of tatami mats instead of a bed. Many rooms have a porch or balcony, which is separated from the rest of the room by a sliding door. History: ryokan have existed since the seventh century A.D. Nishiyama Onsen Keiunkan, the oldest hotel in the world, was built in Japan in 705 A.D. Another old ryokan, Hoshi Ryokan, was founded in 718 A.D. and was considered to be the world’s second oldest hotel until 2011. The latter was continuously owned by 46 generations of the same family.

In Japan, you can also stay at a minshuku, a low-budget version of a ryokan that’s equivalent to a British boarding house or a bed and breakfast. For example, you can stay at Minshuku Toshi. Nishiyama Onsen Keiunkan is the oldest ryokan in the world, was built in Japan in 705 A.D.

If you’re tired of hotel chains and want some variety, pay attention to non-standard types of accommodation. You will learn more about the country and culture you are visiting if you stay at authentic places like a ryokan or a riad.

Moreover, it’s always interesting to discover a new destination not just from its famous attractions, traditions, and cuisine, but also from staying at an unusual hotel with history (and perhaps, even legends). An overnight stay in one of these places will certainly add an extra sparkle to your trip.