The Seven Most Picturesque Lighthouses in the World

The lighthouse is the seafarer’s guiding star and a sure sign that land is very near. Just like hundreds of years ago, its romance and solitude attract travelers who dream of finding themselves on the edge of the world.

Especially for you, we have made a list of the coolest lighthouses, each of which is better to see once with your own eyes than 1,000 times on postcards from souvenir shops.

If you’re an introvert of the hundredth level, this is just the place for you—the northern landscape of volcanic islands and the dark blue sea will stir your melancholic soul to sing. The active Kallur Lighthouse is the quintessence of all your dreams about finally being alone. It is located amid the vast green hills and wilderness of the Faroe Islands. The lighthouse is quite small, so you won’t be able to go inside. How to get there: Let’s say right away that it’s not easy. We’re not talking about public transport here— you can get to Kalsoy Island, where the lighthouse is located, from the main island of Streymoy by car, although you’ll have to take a ferry for around €35 ($40). On Kalsoy Island, you can leave your car in the parking lot in the village of Trøllanes and then go further by foot (the trail will take you no more than 40 minutes). Don’t forget comfortable shoes and waterproof clothing as the weather can change quickly here.

A nearby hotel: Guesthouse Marknagil 2* is in Klaksvík, the second-largest town in the Faroe Islands. At this inexpensive hotel, they make excellent salmon and also hold art workshops. The price per night starts from $75 for two people.

The lighthouse of Lindau is located on the shores of the picturesque Lake Constance at the foot of the Swiss Alps next to swans’ nests and some peacefully swaying boats. You don’t just have to admire it from the outside – the lighthouse is also open to the public (ticket price is €2 / $2.20). At the height of 33 meters, you get a panoramic view of Lindau Harbor and Lake Constance. Across from the lighthouse, there is a statue of a lion—a symbol of the Bavaria region—which also guards the harbor.

The German name of the lighthouse, Neuer Lindauer Leuchtturm, translates as New Lindau Lighthouse; it was built in the 19th century to replace an old one which had served Germany since 1230. How to get there: Take a bus from the central bus station in Munich to the Friedrichshafen stop—it is located in the city of the same name, Friedrichshafen (2.5 hours away). Then take a train (tickets cost approx. €20 / $22.50), which will take you to the lighthouse in 30 minutes (your stop is Lindau). Then walk for 1 km.

A nearby hotel: Hotel Gasthof Inselgraben Garni 2* is in Lindau. The hotel is owned by a married couple who have been taking care of guests for over 40 years. The price per night starts at $95 for two people.

Tower of Hercules, A Coruña, Spain

If you’re going to visit a lighthouse, you’d better make it the oldest in the world! The Tower of Hercules (this is the lighthouse’s exact name) was built during the Roman Empire. For €3 ($3.40), you can climb up the tower to view the breathtaking expanses of the Atlantic Ocean. Near the lighthouse, there is a monument to the Galician King Breogán, who founded the city of A Coruña. The tower is named after the hero of Greek myths: according to the legend, it was Hercules who erected it after he accomplished his tenth labor—victory over the giant Geryon. How to get there: From A Coruña (a six-hour train ride from León for €20 / $22.50), buses #4 and #5 go to the tower. In A Coruña, you can visit the Castle of San Antón, where the Archaeological Museum is now located. The price of admission is €2 ($2.20). You’ll learn about the history of the castle (it was a defensive fortress and a prison), and you’ll delight in the spectacular ocean views.

A nearby hotel: The hotel Sercotel Blue Coruña 4* is conveniently located in the tourist city of A Coruña. The service is great here: there’s a gym, and you can sign up for a massage. The price per night starts from $80 for two people.

The greatness of the countryside will fill you from head to toe when you see the never-ending Irish fields and mountains and feel the cool breeze off the Atlantic Ocean. The lighthouse was constructed in 1817 after the frigate Saldanha got shipwrecked in a gale off the coast of Fanad Head in 1811. You can climb to the top for €9 ($10.20).

County Donegal, where the lighthouse is located, was recognized in 2017 as the most interesting place to travel to. As National Geographic Traveller wrote, this place gives the impression of an undiscovered land. 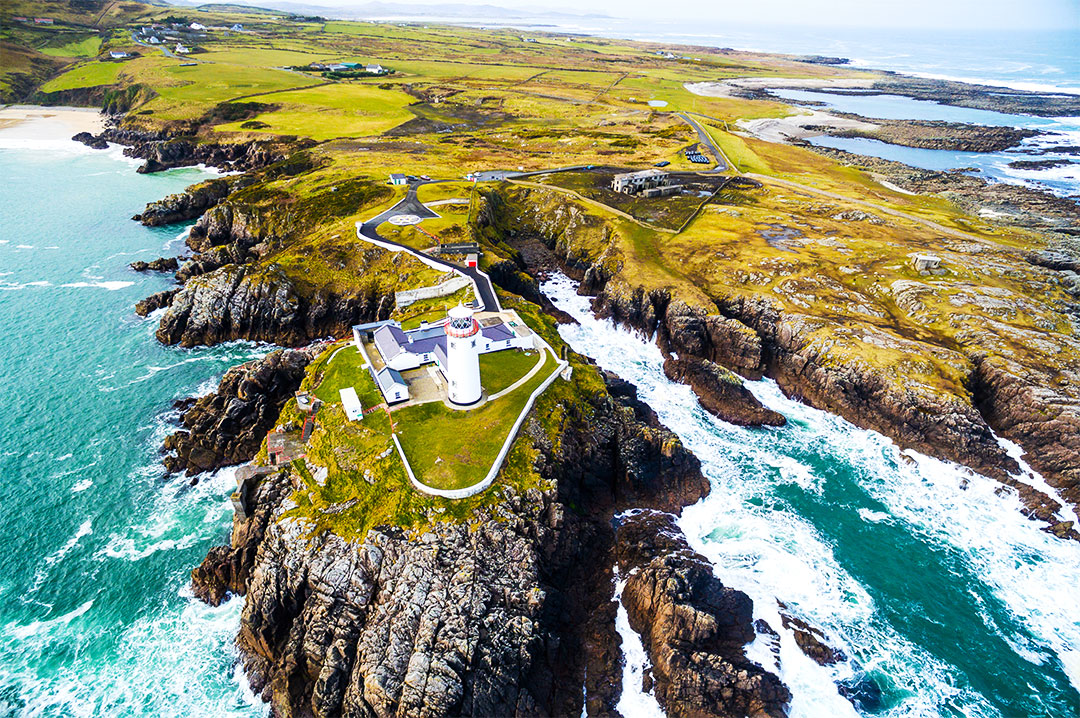 How to get there: We recommend driving to the lighthouse by car so that you can stop at any time. It takes about an hour to get to the nearest major city—Portalsalon. In Ireland, renting an economy-class car starts at $30/day.

A nearby hotel: In Ireland, it’s best to stay somewhere close to the great outdoors. For this purpose, Whitestrand B&B 4* is ideal: there are only three rooms, so the neighbors are unlikely to disturb you with noisy parties, and the hotel itself is surrounded by Irish fields and hills and is a short walk from the Atlantic Ocean. The price per night starts at $79 for two people.

If you’re traveling around England, be sure to visit St. Mary’s Lighthouse. Photographers from top travel publications frequently focus their lenses on this lighthouse, so don’t forget to take your camera with you. You can climb to the top for £3.30 ($4.20). From high above, you can admire the beach and the rocky terrain and relax in silence. How to get there: The journey by train and two buses from Manchester takes almost 4 hours: first, take the train from Manchester Victoria to Newcastle Central Station (travel time is 2 hours, 20 minutes; tickets start at £17), then travel by bus for half an hour to Whitley Bay, and then take another bus from there, the number 308, which takes another half an hour to get to The Links cemetery (a ticket will cost £5.30 / $6.70). From there, it’s just a brief stroll to your destination (approx. 15 minutes).

As you can see, it’s better to rent a car. Especially since there are many national parks (for example, Kielder Park) along the route to the lighthouse.

A nearby hotel: The Park Hotel Tynemouth 4* is located on the seashore itself and there are beautiful views from many of its rooms. The price per night starts at $100 for two people.

Neist Point Lighthouse is located amid the picturesque Scottish countryside. It was bought for the purpose of turning it into a B&B, but was soon abandoned—you can get inside, but all you’ll be able to see is desolation.

The walk itself around the lighthouse will be fantastic thanks to the tranquil Scottish landscapes—you’ll feel like you’re at the edge of the world in this place. To be honest, if you want to be alone, it’s better to come early in the morning as there are a large number of tourists here. The most dramatic shots can be taken at dawn. Don’t forget your warm clothes and comfortable, waterproof shoes—walking to the lighthouse is not easy. If it rains, the path will be muddy and slippery. How to get there: Once again, we recommend renting a car, especially since there is a large parking lot near the lighthouse.

A nearby hotel: An inexpensive hotel Givendale Guest House 2* is located closer than other hotels. You can sleep off your tough, rocky climbs here. You can ride a bike or walk around the shore of the picturesque Loch Portree, which is near the hotel. If you want to swim and the weather does not permit it, the hotel has a swimming pool. The price per night starts at $94 for two people.

If you’ve already been to Istanbul, liven up your next trip by going to the Maiden’s Tower lighthouse. There are amazing views of the city and the Bosporus from here. You won’t be able to delight in solitude here because there are always a lot of tourists, but you can eat in the lighthouse and drink Turkish tea—there’s a restaurant in the tower featuring live music in the evenings. In fact, this lighthouse inspired Aivazovsky himself to paint his famous View of the Leander Tower in Constantinople.

According to a legend, the tower got its name from a Turkish emperor’s daughter whose death was predicted by an oracle. The emperor quickly had the tower built and placed his daughter inside it in an attempt to thwart her death. However, a snake was in a basket of exotic fruit he brought for her birthday—it bit her, and she died. How to get there: You can get to the tower by ferry or boat from the Kabataş pier (only at weekends) or Salacak pier (every day). The price of admission is 20 liras (approx. $3.70).

Hotels nearby: The Burckin Hotel 4* – the hotel’s restaurant features a panoramic view of Istanbul and the Hagia Sophia church. The price per night starts at $51 for two people.