What to See and Do in Milan – 5 Myths

For some reason Milan gets a bad press and is equally disliked by both Italians and visitors. The locals call it the “grey old lady” because, compared with the rest of Italy, the sun doesn’t shine here that often. On top of that, visitors tend to only associate Milan only with shopping and if they aren’t interested in the boutiques, they pass right on by without a second thought. We decided to challenge this injustice. We have drawn up a list of the most negative opinions about Milan we could find and we decided to challenge address them and prove to you why this city should be more deserving of your affections.

Architecture: “the buildings are plain and uninteresting”

If you’re telling me this, then I wonder whether we are talking about the same Milan. Architecturally, there is a bit of everything, from the gothic cathedral to modern architectural wonders like the Bosco Verticale in the Isola district of the city. If you go out to the suburbs, you’ll find a lot of buildings from the 60’s but don’t let that put you off – they bear no resemblance to some of the monstrosities we have at home. The Milan suburbs are basically is everything located outside the second ring road, for example, such areas as Lambrate, Turro and Giambellino, all easily accessible by public transport. In the centre of the city, the grand 15th century gothic cathedral contrasts with the 20th century edifices in the city’s suburbs. Back Also in the centre, iIn addition to the mighty edifices like the Victor Emmanuel II Gallery, which you definitely should definitely not miss, here are some other places you should check out. 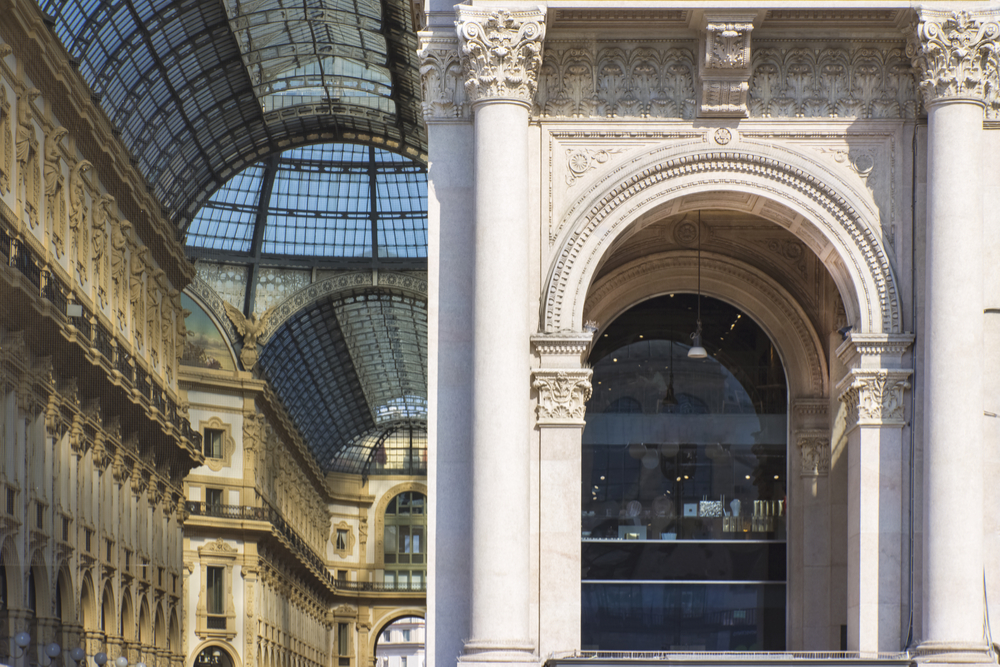 Casa Galimberti, Via Malpighi 6. This building is a great example of the Milanese Liberty style, the Italian version of what is known elsewhere as Art Nouveau or Jugendstil. The smooth lines of the façade are decorated with elaborate drawings and images of young girls as fairy nymphs and the balconies feature images of plants and flowers. It’s almost as if Alphonse Mucha himself had lent a hand, but no: this is the work of Italian architect Giovanni Battista Bossi. By the way, on the ground floor is a branch of Panino Giusto, an Italian chain of cafés where you can enjoy some of the most delicious paninis iIn the city. Milan Central Station. If you arrive in Milan by train, don’t let this building’s beauty pass you by as you rush to your hotel. It’s even worth making time to come back another day when you can properly appreciate its splendour. The building dates back to 1931 and combines the Liberty, Art Deco and Mussolini’s monumentalist style. It is easy to imagine that this is not a railway station at all, but an art gallery. Night life: “There is nothing here for young people”

Night owls and party animals often complain that young people find Milan about as much fun as Mozarella mozzarella past its sell by date. It might seem that there’s nothing to do in the evenings – to be honest, Italy is not known for nightclubs and bars -– but compared to other cities in Italy, Milan is like a mini-Ibiza. In short, there is loads of night life.

Places like Armani Prive and Just Cavalli are overblown, grandiose venues for fashion lovers and the eponymous designers were heavily involved in designing the concepts for these night clubs. If techno is your thing, drop by Amnesia and give Gattopardo a try if you want to dance the night away in a former church. Nothing puritan in this venue – DJ sets until morning, tracks boom out from under the arches and from the balcony you can take fantastic photos of the dance floor. Masada is a loft venue with a terrace, located in one of the city’s poorer areas. It’s not just a discotheque, but also a private club, where on weekdays you can watch movies with your new friends, and at weekends just let your hair down. As for bars, you need to be aware that these tend to be large places with nowhere to sit and where you can only order drinks. Local young people embrace this enthusiastically, buy a drink at the bar then hang around outside in the street, chatting, telling jokes and flirting, just nipping back to the bar every now and then for a refill. There is nothing more normal than to come across a noisy crowd of forty or so young people in a deserted street outside their local bar – so don’t be put off. It’s just the local movers and shakers getting warmed up for a night out clubbing. Many good places are to be found in the Navigli district, often called the Italian Amsterdam because of its canals. Try a little bar crawl just to find the kind of place which suits you. If you are looking for something more low-key, try the Nottingham Forest on Viale Piave 1. It was recently included in the list of the top 50 bars in Europe. Cocktails here are expensive, but very tasty, and they are served in unusual receptacles – tin cans, flasks and even small baths for ducklings.

The locals: “People are unpleasant and the city is dirty”

Let’s be clear about the claim about the rubbish from the beginning. Milan is one of the cleanest cities in Italy. There are huge fines for bad litter management here, so it makes financial sense to keep things clean.

As for rudeness, of course the northern Italians might not have the sunny disposition of the Southerners. They are unlikely to flash you a toothy smile from the other side of the street and tempt you over with offers of Tiramisu and a lavish sprinkling of compliments. The more serious northern demeanour is perhaps quite logical in that most of Italian industry (textiles amongst others) is located in the north and earnings in the south are mainly based on tourism and agriculture. Moreover, there is much more unemployment in the south as well as higher levels of poverty, so southerners have little choice but to be friendly, sociable and eternally happy – – it’s their livelihood. The Milanese are quite reserved and see themselves as somehow superior, but this does not mean that they are rude and unpleasant. If you get lost, they will show you the way. If you drop your bag, they will help you pick up the contents. If you want to get a warm response from the locals, try speaking some Italian, even if it’s only “Buongiorno, signora!”

Take a phrasebook with you and use it actively. OK, the first time you will feel a bit silly as you leaf through the book, but then you start to remember the most commonly used phrases. So, in this way you’re not just changing the way you relate to the inhabitants of the north, but you’re also getting some practice with one of the most beautiful languages on Earth.

To make life a little easier, here are a few Italian phrases to bring joy to the heart of any local resident of Milan.

— Il suo ristorante è meraviglioso! You have a wonderful restaurant!

— Milan l’è Semper on gran Milan – a phrase in the Milanese dialect that will definitely raise a smile! “Milan is always beautiful.”

Atmosphere: “It’s not really all that Italian”

Let’s get this straight. People who have this gripe seem to see the “true Italy” as a country of pretty little streets, shabby little houses with tiled roofs, a little church in every side street and a fountain up every alley – and it would be true to say that this is not really Milan. Milan is an industrial city, the second- largest in in the country. There is a lot of industry here, high rise buildings, wide streets and boulevards. It is a business centre where a lot of people live and work. But is the essence of Italy solely based on what its streets look like? What about the smell of coffee and brioches from every pavement café – try breakfast amidst the 18thth century buildings at the Rotonda Bistro? Or what about the buzz of the lunchtime chatter in any restaurant? Or the wonderful food and rivers of wine, the way your mouth waters as soon as you open any menu? What about a ride around the city on the municipal bike service Bikemi? Very simple to use and pay for – and there are both ordinary bicycles and electric ones for those less energetic amongst us.

Milan is not only a medieval Italy, but it is also the Italy of the seventies and eighties, with the rise of the fashion industry, when Versace, Armani and Dolce & Gabbana burst onto the scene, the Italy of spectacular window displays, expensive perfume and elegant folk dressed in beautifully tailored suits. If you are still frowning sceptically and continue to crave narrow streets, take a look at the neighbourhood of Brera. Gaze through the antique shop windows and be sure to visit the Pinacoteca Di Brera, an art gallery located inside a beautiful Baroque palazzo.

“Are you crazy?!” I want to cry, and here the discussion might end, but the fact is this is not the claim of some armchair commentator, but the Italian novelist and journalist Dino Buzzati, who wrote an entire book on the subject, including such unflattering quotes from locals as: It’s true that not all Milanese eateries are there to delight you, but you show me a city where all the restaurants are perfect – thatit’s the stuff of fairy tales. Yes, sometimes the paninis are soggy, but that is no reason to tar all the city’s establishments with the same brush. And to say that there is nowhere to eat in Milan is simply not fair. First, it is a big city and, not least because of its size, it is full of places with a huge variety of prices and menu types. Secondly, thanks to the large influx of people from all over the country and beyond, the specialities of almost all the Italian regions can be found here.

Try the Sicilian cannoli in the café La Delizia. For Pancerotti from Puglia go to Luini, and for the best Calabrian Nduja (sausage, which can be eaten both in slices and smeared on bread) go to the restaurant Don Jo. Also in Milan there are many places serving Chinese, Indian, Japanese, Mexican and American food. Remember that Milan is not an Italian village but an established European city. There is no point in seeking the out the peace and quiet of the countryside or to trying and to make friends with the little old man next door. But you should find great pleasure in the variety of food and drink, the museums, clubs and bars, all with that Italian flair. Many architectural styles and periods come together in Milan and people are drawn here from all over Italy and from other countries. This is the home to international design and fashion…life here is exciting and fast-moving. But most importantly, in Milan the people know how to take time out to enjoy the sunshine and a pistachio gelato.