Java – What Is There to See Apart from Bali

Java is the (unlucky for some) 13th largest island on the planet. It has certainly been unlucky in its choice of a neighbor when that neighbor turns out to be Bali, and you are just seen as some kind of transit point to get there. Nevertheless, Java is an important and interesting part of Indonesia in its own right – the biggest region in fact – but we will come to that in due course.

Most people have heard of Indonesia’s capital, Jakarta, but not so many people realize that beyond the airport perimeter lie 150,000 square kilometers of beautiful island landscapes containing no fewer than four of the countries eight UNESCO world heritage sites. People who actually come to visit this are from Bali! The laid-back beach life, high waterfalls, and the Indian Ocean are perhaps so stressful for some that they have to seek refuge on the neighboring island, thereby subjecting themselves to a journey of many hours.

Getting there by air

You will have got the idea that the 13th largest island in the world is not a small place, so what do you do if you want to get around as much as possible? There are six international airports on Java with flights to Bali, Borneo, Thailand, and even Australia, meaning that you can fly to Java for a short break from virtually anywhere in South East Asia.

Java is a colorful place and is covered with spectacular volcanoes and beautiful temples. There are dozens of good reasons to visit Java in its own right, or even just to spend a few days. 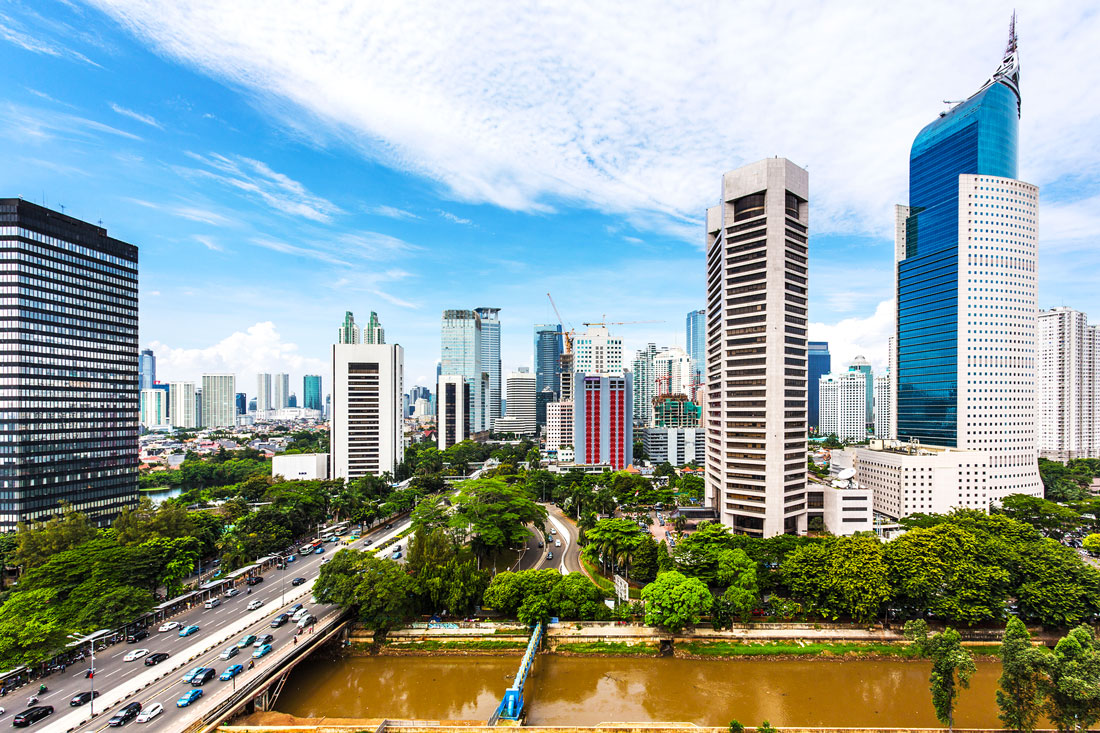 On arrival at Jakarta airport, look for the signs to the Sky Train, a monorail that opened about half a year ago and connects all the airport terminal buildings with Soekarno-Hatta Airport Railway Station. Now the journey lasts only an hour and costs 70,000 rupees (€4.80/$5.30). You can only pay using a bank card in the terminal station.

Take a walk around the center to get a feel for the place. Jakarta is a typically South East Asian city whose enormous skyscrapers sit cheek by jowl with poorer dwellings made of anything the inhabitants could get their hands on, where street food and strange smells change every 50m and where people’s smiles are brighter than the sun. This is a huge city and until recently had no underground railway. The first metro station opened on 24th March 2019, and before then, you had no other choice but to sit in stuffy traffic jams if you wanted to get anywhere. Soon, Jakarta will no longer be the capital city as the Indonesia authorities have decided that new capital will be located in the province of West Kalimantan on the island of Borneo. They haven’t come up with a name for it yet.

When I first came to Jakarta, it took me eight hours to get from the plane to the train, and seven of those were spent asleep on a bus in a traffic jam. Needless to say, the train left without me. Not a great start, obviously.

Much more interesting in this part of the island is the city of Bandung and its outskirts, 180km southeast of Jakarta, so it makes little sense to hang around in the capital for more than a day. A three-hour train journey costing 65,000-130,000 rupees (€4.50-€9.00/$5.00-$10.00) will take you from Gambir station up to this colonial plateau paradise, surrounded by mountains and tea plantations.

They call this city the Paris of Java thanks to its Asian-Bohemian laid back feel. Here you can stay at the Sheraton or Hilton, eat at the Sierra Café (average check 150,000 rupees/€9.80/$11.00) with a beautiful view over the city, or have a mooch around the shopping centers and outlet stores. It’s not just people and horses thronging the streets here, but there’s a bit of everything – rickshaws, taxis, horse-drawn carts all out on the roads at once, fast food stalls sell their wares on the pavements. To your right, a woman weaves silk, to your left a man loudly bashes a hammer against an anvil and a bit further down the road, a man in a colorful Bob Marley beret expertly paints the landscape onto a canvas. Yogyakarta is the island’s cultural capital where you will find many art galleries and museums, atmospheric street markets, the sultan’s palace, and some theatres. However, I have lost my heart in particular to the two main tourist attractions – the Borobudur Buddhist temple and the ancient Prambaban complex.

Built in the 9th century and abandoned by its inhabitants in the 14th century after the eruption of Mount Merapi (to this day, the most active volcano in all Indonesia), Borobudur was only rediscovered under layers of ash in the 19th century. This huge Buddhist temple stands on square foundations which are 118m long each side and is eight stories high. The three uppermost stories are circular, and there are 72 steps thereon in which 504 statues of the Buddha are located. To reach enlightenment, you have to go round each story eight times in a clockwise direction.

A well-tended park and nicely mown lawns with immaculate flower beds give a false impression of modernity, an impression which melts away without a trace after the first 100m. Like mighty heroes, three enormous temples suddenly bear down upon you as they appear from behind a well-tended green curtain of trees. These three are not the only ones, they are the only ones visible from the park; in fact there are many more temples than that. Prambanan is a whole complex of Hindu temples, the biggest in Indonesia, and one of the biggest in South East Asia. You can visit both places in a day. The best way is to hire a car and driver for the day. It’s not hard to find these – via the reception of any hotel, on the street, in restaurants – in short, they are all over the city, just waiting to be hired. Agree on what you want with the driver the night before. Head to Borobudur by 6 am as that’s when the gates open, and you will catch the sun as it rises from the thick mist, hanging over the valley at the foot of the temple, gradually illuminating the carved steps. Then head for the park and ruins at Prambanan.

This is Java, my child

They will offer you money here to have their photo taken with you. Yes, you heard right. It brings good luck to have a photo with a light-skinned person. Remember to avoid visiting Prambanan on Tuesdays, Thursdays, and the third weekend of the month, which is which the school groups are there. You will be inundated by requests for photos from virtually every Indonesian schoolchild. Real adventures begin when you dive into the local culture…

The basic hotels in the village of Chemorolavang at the foot of the volcano cost anything but basic money. They basically have a monopoly, but then again, they know they also offer a view in a million. It’s not so high, around 2000m, but the sky seems incredibly low and gives a very striking impression of just how many stars there are in the universe. You can tell how close we are to the equator. It’s almost as if it’s not worth taking a room in a hotel because the sight of that sky can keep you here for hours, and then at 4 am, you jump into the jeep and make for the foot of the volcano to greet the dawn. But the nights here are very cold, and temperature can drop close to zero. They have extra quilts in the hotel rooms. A way around this is to go most of the way on foot. , about 4.50km from Chemorolavang village to the viewing platform at King Kong Hill, where you can greet the dawn and then take a bike taxi to the foot of the volcano (100,000 rupees/€6.40/$7.00) and then walk the 3km back to the village afterward. You can get away without paying anything to get into the park that way.

Overland public transport in Indonesia is extensive and convenient. One thing you need to get used to is that the buses and minibusses never leave or arrive on time. Never. You should also be aware that the drivers like to try and earn a bit on the side regardless of the official, advertised price of the ticket. Each full bus has its “price” which is the ticket price multiplied by the number of seats, and as long as one of these conditions is not met, the bus won’t be going anywhere. If you want to leave now, you pay for the empty seats on the bus, or you wait. Sometimes for hours.

Getting up to the world’s largest acidic lake, you need to slog it up the side of the volcano (about 3km) and then drop down into the crater. It’s best to go at night, around 2 am. As you ascend, you will be rewarded with wafts of sulfurous gases, light blue flames, and bright yellow chunks of sulfur. Doesn’t sound too attractive, does it? As you get closer, you see the bright blue flames, ribbons of gaseous sulfur, heated to 600 C, erupting from fissures in the mountain and igniting on contact with the oxygen in the air.

As the sun rises, the blue flames become dimmer, and they are replaced by a beautiful turquoise-colored lake. I can’t figure out whether it’s just the ascent doing this to me or whether it really is that pretty. You will need a mask, comfortable shoes and a good head-torch – and even with all this equipment, your eyes will still probably water and breathing will be difficult – but then again, who said that breathing on another planet would be easy? You just can’t call this an earth-like landscape. Entrance to this other world costs 100,000 rupees (€6.40/$7.00) during the week and 150,000 rupees (€9.50/$10.50) at weekends. You can hire masks there for 25,000 (€1.60/$1.75).

There is not much logic in the way transportation is organized on Java, and accommodation prices are not always what you would expect. For a few dollars, you might find yourself in a windy tent or a superb hotel room with starched linen sheets. Many of the locals on the island have yet to figure out how to squeeze tourists to the max – and this means that you’re guaranteed a smile and a hug.