Lucca in a Day: Getting It All Done

Lucca, in Italy, is where the famous composer of operas Giacomo Puccini was born, but the old house where the musician lived and worked is not the only thing worth seeing in Lucca. The compact historic center of the town has kept its medieval appearance and will appeal to the most romantically inclined of travelers.

As you walk through the narrow streets of Lucca, it’s easy to see yourself as a knight of the Renaissance era, or a beautiful damsel fought over by brave men as they try to win their heart.

Lucca is a small town in sunny Tuscany, so the weather is normally good. I visited Lucca in January sporting a woolen coat and warm boots, but there was no wind or rain. If you take the whole year, though, the best months to visit would be April-May and September-October. Lucca can be hot and dry in summer, and there is a higher risk of rain in the winter. Lucca is 20km from Pisa, so the easiest way to get there is by train from the Stazione Pisa Centrale railway station. A ticket costs only €4.00/$4.40, and the journey takes around 25-30 minutes. 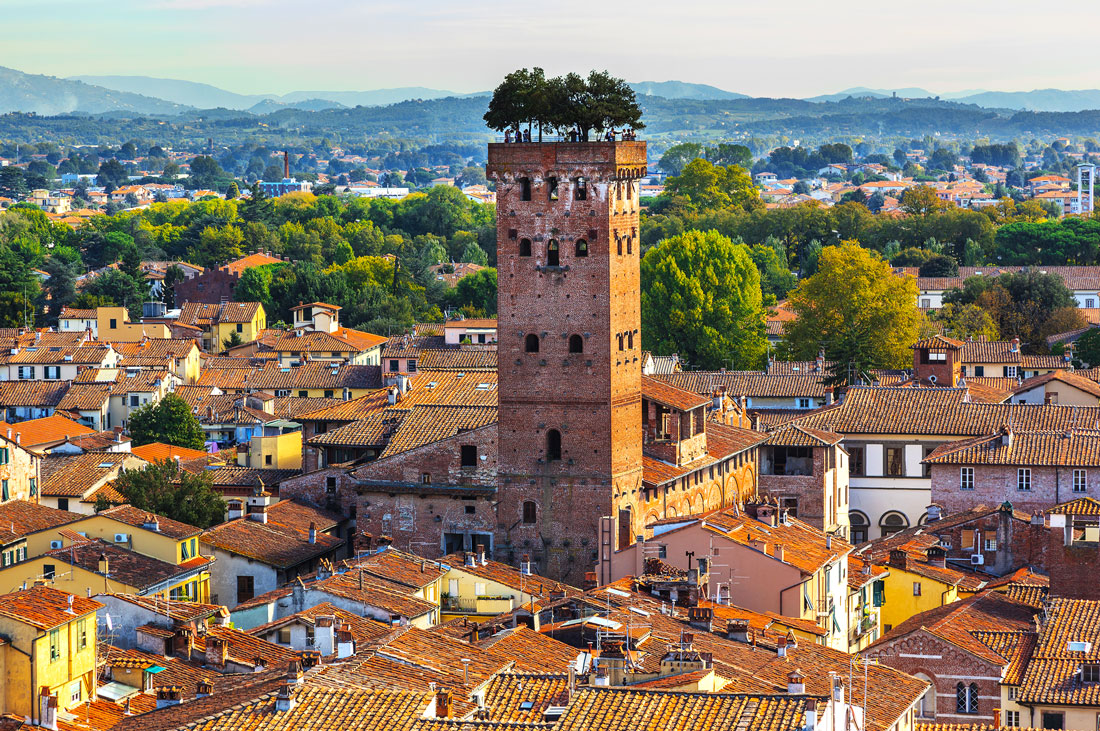 The most famous sight in Lecco is the 4.20km long city fortification dating back to the Renaissance period. The walls give Lucca’s historical center a real medieval flavor.

The northern gate is dedicated to the Virgin Mary, the southern one to the Apostle Peter, the western one to Saints Donato and Paolino, and the eastern one to Napoleon Bonaparte’s sister, Elisa Baciocchi. Porta Elisa was not built all that long ago, at the beginning of the 19th century. It’s built in the neoclassical style and resembles a triumphal arch, whereas the other gates date back to the Renaissance period.

Where to stay in Lucca

A standard room with shared facilities at the Tropical B&B hotel costs around €42.00/$46.00 per night, including breakfast. The more comfortable L’Arancio hotel is 1.3km from the center and an en suite room for two costs €56.00/$62.00 per night.

The Piazza dell’Anfiteatro is Lucca’s central square – in the shape of an oval. This is where you will find the tourist cafés and souvenir shops. If you want to sit on one of the summer terraces and take in the old town atmosphere, make sure you check out the online reviews before you order any food or drink. I usually compare the traveler reviews on Tripadvisor and Google Maps, and as long as the rating is no lower than four on both, I will use the venue.

The Piazza dell’Anfiteatro stands on the ruins of a Roma amphitheater, which was built in the first century BCE. The history books tell us that the ancient amphitheater could seat 20,000 people, but today the area is the busy town center for locals and tourists alike.

The Duomo di San Martino is Lucca’s Roman Catholic cathedral founded in the sixth century and consecrated in 1070. The cathedral houses many works of art from Florentine artists and Tuscan sculptors, including such great names as Fra Bartolomeo, Tintoretto, Domenico Ghirlandaio, and Matteo Civitali. The sculptor Civitali was responsible for the Altar of St Regulus, the statue of St Sebastian, the marble memorial to Pietro Noceto, and much more.

A noteworthy detail of the cathedral is its labyrinth, which is carved into a single stone within the porch. Its inscription warns that this “is the Cretan labyrinth that Daedalus built. From it, no one who entered could escape except Theseus, who succeeded through the grace of Ariadne’s thread”.

The Basilica of St Fridianus is a Romanesque Catholic church and venerates the erstwhile Bishop of Lucca St Fridianus. His remains are kept here. He had the first church built here in the sixth century, but its current Romanesque style dates back to a few centuries later, to the period between 1172 and 1147. Interesting details include a mosaic depicting Jesus Christ and the Apostles on its façade and inside some white marble carvings, a Roman cupola depicting the Old Testament story of Moses. The entrance costs €3.00/$3.30 and children to age 11 go free. The Museo Nazionale di Palazzo Mansi is located within a palace which was built towards the end of the 16th century. The Mansi family bought it in 1616 and rebuilt the interior in Baroque style, and the palace became a museum in 1965 when it passed to the ownership of the State. 12 years later, the Palazzo Mansi opened as a national art gallery. Here you will see works by Ttian, Tintoretto Veronese, various representatives of the Tuscan and Flemish schools such as Paul Bril and Andrea del Sarto. Adult entrance costs €4.00/$4.40 and children and young people to age 18 go free.

The Puccini museum is worth visiting, even if opera isn’t your greatest passion. The atmosphere of the old town is really embodied by a visit to this ancient dwelling. The inhabitants for Lucca are proud of their greatest son, as is testified by the inscription in the plaque outside: “Giacomo Puccini was born here on 22nd December 1858, coming from a long line of musicians and worthy of the long-established traditions of his home – this town, proud of its son, remembers him on the 30th day after his death. 29th December 1924”. Inside the museum, you will find furniture, paintings, Puccini’s letters, and even the grand piano he used to compose with. Adult entrance costs €7.00/$7.70 and children cost €5.00/€5.50.

If you like heights and panoramic views, then head for the medieval Guinigi Tower, where you climb 230 steps to a viewing platform complete with its own trees. This factor has earned the attraction the status as one of the symbols of the city. An adult ticket costs €5.00/$5.50, and children to age six go free. You should try to take lunch or dinner at the Osteria da Rosolo. Whereas it is a tourist restaurant, this is one of the better places, for example they do great lunchtime menus with spinach and ricotta ravioli for €10.00/$11.00 or lasagne with pesto sauce for the same price. The normal menu features steak Florentine, fish and grilled chicken, vegetable salads, and soups.

Buccellato is a traditional pastry from Lucca. It contains many different ingredients like dried fruit, walnuts, pistachios, and almond, but the ingredient which has to be added if it is typically from Lucca is aniseed. Buccellato is considered a type of cake and is eaten fresh and cut into slices.

You can try Buccellato in the old Buccellato Taddeucci on Piazza San Michele, which has been there since 1881. It is a legend in the city and its talented baker, Jacopo Tadeucci was the one who invented this sweet cake made out of simple ingredients.

Lucca is the ideal destination for a day out. It’s not so big that you can’t see all the main sights but not so small that you would see everything too quickly. Lucca offers some fantastic cathedrals and high towers, art galleries, and the main attraction of the impressive and picturesque medieval stone walls. They used to protect the city from attack, but now they protect its history.