Visit Them All: The Best Summer Music Festivals 2023

If you enjoy making new friends from different parts of the world, discovering new musical names and attending cool parties, then this review is for you. The music festivals of 2023 come with non-stop live music for days, romantic nights spent in tents, a cultural mish-mash and a burst of energy to last for many months to come.

Over 100,000 music fans gather in the Danish city of Roskilde every summer to immerse themselves in the world of music for eight days. Roskilde Festival is the most famous north-European festival and provides the audience with a choice of eight stages. The main stage, called orange, is for headliners, while the others are for less known performers. Since it was first launched back in 1971 the festival has hosted famous musicians and groups including Bob Marley, U2, Metallica, Nirvana and Radiohead among others.

Money raised from ticket sales is donated to charitable causes, supporting all types of art and NGOs such as the WWF and Doctors Without Borders.

Since 1999 the festival organizers have also put on a naked run (yes, it’s just what you are imagining!): if you cross the finishing line first you get not only a body-positive boost, but also a free ticket for the following year. There are always two winners – a male and a female. Since it was first launched back in 1971 the festival has hosted famous musicians and groups including Bob Marley, U2, Metallica, Nirvana and Radiohead among others. Photo: Kjeld Friis / Shutterstock.com

One of the coolest European rock and indie music festivals has been held near Lisbon every year since 2007. Within this period, NOS Alive organizers have been able to attract such stars as Beastie Boys, Linkin Park and The White Stripes, Bob Dylan, Gogol Bordello, Tiga, MGMT, Metallica, Does it Offend You, Yeah? and other leaders of the music charts.

Music lovers can stay at Lisboa Camping and Bungalows, a tent campsite just five minutes’ walk from the event. Entry plus a spot for your tent costs very little compared with other festivals (€19 for three nights). You also get a pleasant bonus: if you buy a spot then you get free transfer to the campsite.

One of the coolest European rock and indie music festivals has been held near Lisbon every year since 2007. Photo: Ga7o / Shutterstock.com

Tomorrowland is not only the event of the year for all fans of electronic music. It’s a magical country for any ticket holder. The festival organizers try to create a truly fairytale atmosphere: laser shows and thematic decorations everywhere. And, of course, the world’s top DJs: Paul van Dyk, David Guetta, Otto Knows and dozens of others. The full list is here. 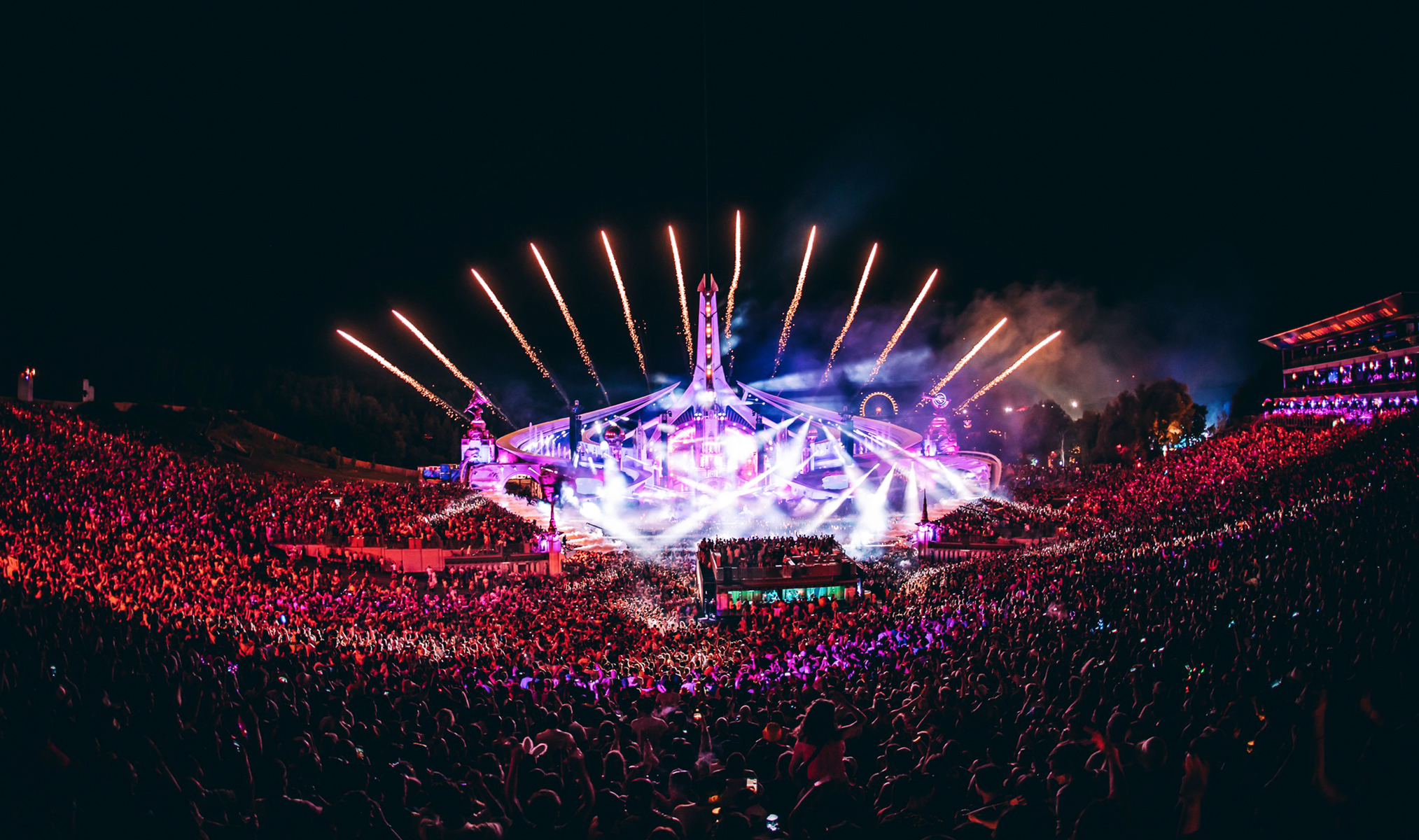 Once you get too tired to dance anymore, go and catch some sleep in Dreamville, a modest town built by the organizers specially for the event’s guests. It has all sorts of tent options, of which the cheapest (a place for your own tent) costs €335 for three nights.

It also has amenities: food stalls (≈ €7–10 per portion) and a shower (€1.50 for one use). It’s almost impossible to find accommodation in Boom itself during Tomorrowland unless you book a hotel a long time in advance. You can also rent accommodation in Antwerp.

The Sziget Festival has been delighting music fans for 25 years. It has won over hearts with its powerful line-ups. David Bowie, Iggy Pop, Lily Allen, Kool and the Gang, Boney M, The Prodigy, Snow Patrol, Placebo, Offspring and others have all performed here various times.

To make room for a huge number of performers, the organizers run the festival over a whole week. You can stay in your own tents (free for ticket holders), or in thematic campsites which you have to pay for: Siesta, Park, Caravan and others. Daily tickets start at €65 per person for six days. The Sziget Festival has been delighting music fans for 25 years. Photo: joyfull / Shutterstock.com

Primavera Sound is a famous music festival in Barcelona. Every year, the organizers run a series of innovative and influential events with diverse musical genres, including Lo-fi Indie, glam pop, Latin trap, or underground techno.

All this takes place in the cult location Parc del Fòrum, where the Mediterranean Sea and its famous architecture create a unique background for the music. You can rent accommodation in Barcelona. The rock festival takes place on the Särkänniemi peninsula in the Finnish city of Tampere. Next to it you will find a famous theme park with loads of attractions, a dolphinarium, a planetarium and a mini-zoo. So if you want, you can add to or continue your music program. A ticket to the attractions starts from €49. RockFest is the biggest festival in Finland. Photo: RockFest / facebook.com

Lollapalooza is an alternative music festival that has been held in Chicago since 1991. It was invented by American singer and Jane’s Addiction frontman Perry Farrell as a farewell tour. Eventually, though, it transformed into an annual event in which heavy metal, hip-hop and punk rock groups all take part.

The festival is organized in Grant Park in Chicago. This is the biggest park in the city, and it encompasses the many kilometers-long Lake Michigan beaches, an aquarium, planetarium, an arts institute, the Museum of Science and Industry and other sites. Lollapalooza is an alternative music festival that has been held in Chicago since 1991. Photo: Lollapalooza / facebook.com

In the 1990s, Lollapalooza traveled around American cities, and later even moved overseas. These days it is held in various countries. In Europe, you may visit Lolla in Berlin, Paris and Stockholm.

Rock am Ring is one of the world’s biggest rock festivals, and the main one in Germany.

Traditionally, the headliners consist of elite stars: from titans of metal Metallica and Iron Maiden to alternative groups Rage Against The Machine, Linkin Park and Smashing Pumpkins; from hard rockers Kiss and System of a Down to Britpop musicians including Radiohead and MUSE. Thanks to these big names, a great number of people – 150,000 – visit Rock am Ring annually!

If you have not encountered before the local festival meme “Helga”, then you definitely haven’t visited this open-air event! There is a tradition of shouting out “HELGAAAA” at Rock am Ring. The story is that several years ago, a festival-goer lost his girlfriend (called Helga) in the crowd and started looking for her by screaming her name. The poor guy spent all night running around the Rock Am Ring grounds shouting out her name, thereby waking up several hundred people who were sleeping peacefully at the campsite. Since then, the tradition of shouting “Helga” at the top of your voice has persisted at Rock am Ring. Rock am Ring is one of the world’s biggest rock festivals, and the main one in Germany. Photo: Rock am Ring / facebook.com

Slam Dunk started out in the early 2000s as a pop-punk club night at The Cockpit, Leeds. After the success of Slam Dunk club night, international tours started for artists such as Fallout Boy, Paramore and Panic! at The Disco, after which the Slam Dunk festival was launched. Today, Slam Dunk is the UK’s number one festival for pop-punk, rock and alternative music. It attracts over 50,000 rock fans.

Pleasant bonus: after the main program, the famous Slam Dunk Afterparty awaits you every day; this is a party with DJs and special festival guests. Colours of Ostrava is the biggest festival in Eastern Europe. An advantage of the festival is that it is less hyped than Sziget and Open’er, which means that the atmosphere is cozier and friendlier. Here’s an idea: take a detour to Prague on the way or on the way back. By the way, you’ll be amazed at the festival’s location. Ostrava was a coal and metal industry center for over 150 years and was considered one of the dirtiest parts of Europe. In 1998, the government closed all loss-making mines and the outdated Vítkovice factory, after which the city experienced a second life. Decades later, this is where an exciting concert life sprang up. It became a platform where world stars and 50,000 fans could meet.

The concert program of this mixed-genre festival also comes with hundreds of programme items on dozens of open and covered stages – drama performances, discussions, creative masterclasses, films, art shows and much more. Events bringing crowds of music fans together are held just about all summer weekends throughout the world. If you are one of them then it’s already worth booking a ticket, buying a tent, and finding kindred spirits to share your enjoyment of a festival voyage.

The only thing left is to book a hotel