The Most Awe-Inspiring Caves in Europe

In ancient times, caves served as dwellings and protective shelter for people – but now they are an excellent alternative to more traditional sightseeing attractions. When you have done the history of a place from top to bottom, then maybe it’s time to take a closer look at these natural sculptures, some of nature’s most skilled art forms.

6 minutes read
If you’re thinking of visiting caves, also think about safety and comfort. Wear flat, non-slip footwear with thick soles which fit well (trainers – OK, but not slingbacks and stillies). In caves popular with tourists, the going is safe and easy, but you should never tempt fate. Inappropriate footwear and a stray pebble can lead to disaster.Don’t forget to take a jacket or a windbreaker, even if the weather is hot outside. It’s probably going to be chilly and damp in the cavesб and you’ll not want to be spending the remainder of your holiday in the hotel room with a runny nose. You might also want to think about insect repellent so you don’t get bitten and a small torch so that you can look at interesting features close up. You might want to think about extra insurance too.

No visit to Capri is complete without a visit to the Grotta Azzurra, sea caves which have been well-known since ancient times. Researchers have discovered the remains of ancient Roman statues here suggesting that these caves were once some kind of religious sanctuary.

It’s probable that, like today’s tourists, the Romans were drawn here by the emerald blue light, an optical effect caused by the way the light is refracted through the surface of the water.

Crete has many cave systems, and one of the best known is the Ideon Cave. Which was considered a sacred place by the ancient Greeks – in fact, according to their mythology, it was here that the god Rea hid the baby Zeus from the wrath of his father, the Titan Cronus, later deposed, who was pursuing him. 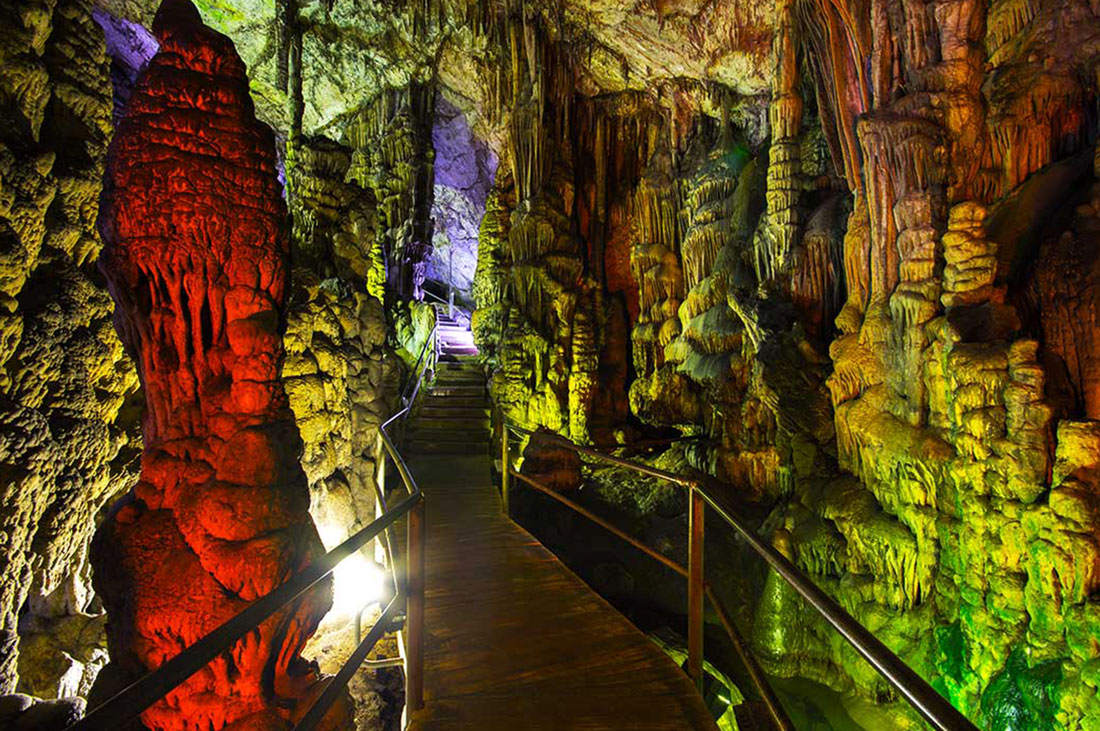 According to the legend, the Corybantes, priests of the Phrygian cults of Rea and Cibele, indulged in lavish rituals at the entrance to the cave, singing and dancing to cover the cries of the baby. The caves were studied by academics at the beginning of the 19th and 20th centuries and were identified as architecturally valuable relics from the Minoan epoch. There are steps down into the caves.

Another jewel of Crete are the Dikteon caves above the Lasithi Plateau. These caves, like the ones at Ideon, are also linked to the legend of young Zeus. It is said that here in the Dikteon caves, Rhea gave birth to the future god of thunder and presented Cronus with a stone from the mountainside wrapped in swaddling instead of the baby.

Minoan ceramic artifacts have been found here during excavations meaning that they have been worshipping Zeus here for more than 2000 years. You can see these finds in the Heraklion Archeological Museum (entrance costs €5.00 out of season, €10.00 in season) and the Ashmolean Museum in Oxford (UK) (free of charge). There are steps into the cave, and the interior is well lit.

The caves at Rouffignac in France have many nicknames, such as the “cradle of civilization” and “caves of a thousand mammoths”. These names come from the plethora of wall paintings showing the variety of ancient fauna of the time. The nameless artists (and hunters, for that matter) have left us with drawings of buffalo, mountain goats, woolly rhinoceros, and mammoths. Rouffignac is of colossal historical and architectural value, and only part of the caves are open to the public who are driven through the galleries on a small electric train.

The Gutmanis Cave is considered the biggest in the Baltic region and was named after the doctor who used to treat the townspeople using the waters from the local spring. Many legends are associated with the cave, from pagan tales inspired by the cave’s majestic presence to actual, documented – and romantic – events. The most famous of these is the story of Rose of Turaida, a story which mixes fact with fiction. Rose of Turaida was known as the beautiful Maija, the adopted daughter of the keeper of the nearby castle. The young maiden had a suitor, the gardener, Viktor. The young lovers would regularly meet near the caves. But also in love with Maija was the deserter Adam Jakubovsky, who could not accept her rejection of him. He sent her a letter in Viktor’s name asking her to meet him at the Gutmanis Cave. Maija rushed there but soon understood that she had been tricked. Jakubovsky tried to overpower her roughly, but she tricked him back by convincing him that the red silk scarf around her neck had magical powers and could withstand fire and sword.

Adam decided to test the power of the scarf and struck Rose of Turaida with his sword. The blow killed her outright, and she dies with the name of her faithful lover on her lips, never giving in to the sly rascal Adam. To this day, young lovers come to the caves and light candles in honor of the brave and loyal Rose of Turaida. The caves are close to the castle of Turaida, and it takes about 1.5 hours to get there from Riga.

The Škojan Caves are some of the best limestone karst systems anywhere in the world. People have lived in these caves since prehistoric times and settlements grew around them over thousands of years BCE. The Škojan caves re rich in rare and ancient plants and minerals. Their value is such that they are included as a UNESCO World Heritage Site.

The Škojan Caves are made up of an enormous network of tunnels and caverns extending 6km underground. Some of the subterranean corridors have collapsed, forming pretty valleys and gorgeous waterfalls. The Caves are part of the Škojan Caves National Park, and visitors are admitted to a reinforced gallery with paved walkways.

A visit to the caves can make a pleasant change to a city break or beach holiday. As you can see, it’s a “three-in-one” win – you will see unparalleled beauty, find out lots of new things and get up close and personal to nature. It’s really worth a try.