Restrictions throughout the world are gradually being lifted, and we are returning to our usual routine of taking walks, holding meetings, and visiting shops. And very soon we will head for museums, theaters, and cafes. And while we wait for museums and art galleries to open across the board, we tell you about a safe and free exhibition hall — the street.

The days when graffiti was considered vandalism have long gone. Today street art (attractive street art) is part of our aesthetics, a social or political statement, and the image of many modern towns. And so we have put together for you the world’s top 10 graffiti works, that you will soon be able to see live.

My God, Help Me to Survive This Fatal Attraction!, Berlin, Germany

Description and history: We think that you know this work quite well, even if you have not seen it live. The graffiti shows a kiss between Leonid Brezhnev, the Soviet leader, and Erich Honecker, the leader of Communist East Germany. The kiss was intended to symbolize the ten-year agreement concluded between East Germany and the USSR in 1979 and was printed as a photo in hundreds of newspapers.

The Berlin Wall fell in 1989 and was transformed in 1990 into an open-air gallery. That same year, work of Dmitri Vrubel appeared on the eastern side of the wall (before the wall fell, his graffiti only embellished the western side). His work was significantly damaged by 2005, and he was asked to restore it.

Description and history: The huge graffiti covering an entire wall portrays two realistic whales hung from a clothes hanger wrapped in a piece of cloth. The artists wanted to highlight the problem of mankind exploiting natural resources. This work appeared on the wall to mark the festival of street art in Grenoble in 2016. 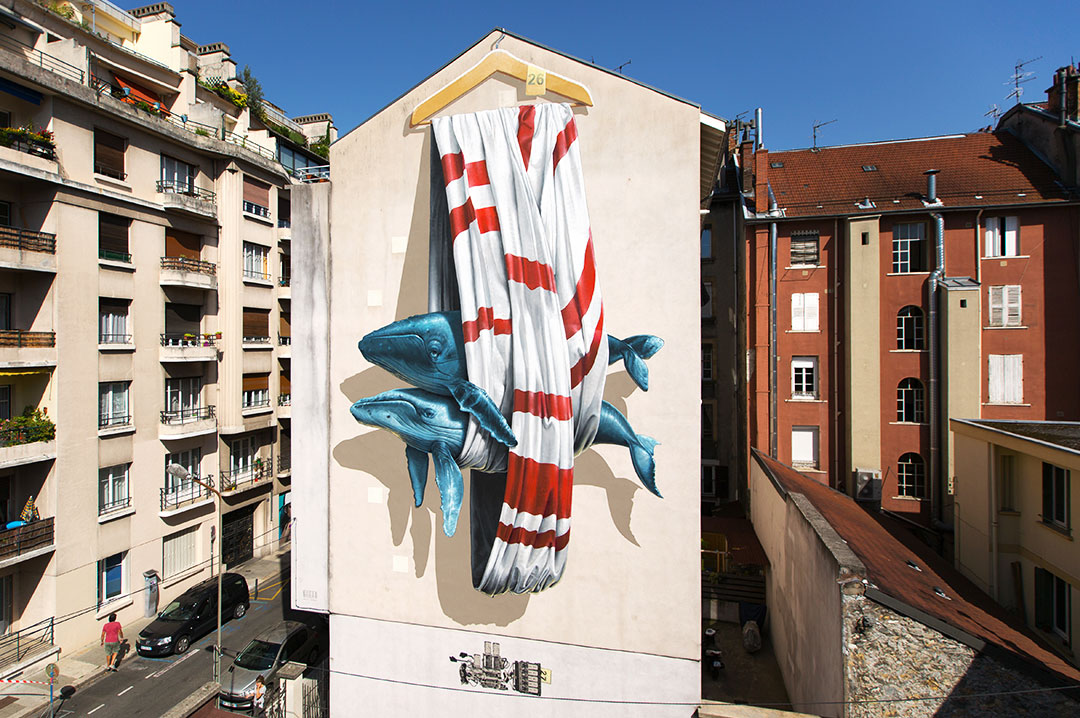 Description and history: Kelburn Castle was built in the 13th century, so it’s no surprise that it required significant reconstruction by 2007. The castle’s owner, Patrick Boyle, Earl of Glasgow, suggested that the state agrees to an original idea — he invited famous street artists to paint the castle facade. The original abstract drawings attracted many tourists, and the idea was to spend the money from selling tickets on the reconstruction (and then to erase the graffiti). However, the earl liked them so much that rumor has it that he continues to correspond with the government, trying to defend his drawings so that they can remain forever. The Scots are stubborn people, and we don’t know who will win. So hurry up and head for Glasgow.

Description and history: Lisbon has every right to be considered one of Europe’s street art capitals — it even has a government department responsible for street art. So street artists here are liked and respected, and not considered vandals. Bordalo II is a Portuguese artist and activist, famous for his Trash Animals series of works. These aren’t simply drawings on walls, but vast installations made out of trash. Bordalo II wants to draw society’s attention to environmental problems and their effect on animals. Each of the artist’s works took him from 3-7 days.

Description and history: The first drawings appeared on this wall opposite the French embassy immediately after John Lennon’s death in 1980. The government waged a long battle against this “vandalism,” but according to rumors, the French embassy provided support to the fans and requested that the wall be left in peace in order to prevent protests and unrest. New drawings and inscriptions appear to this day, so each time you visit Prague, you will find something new on the wall.

Description and history: This brightly-colored graffiti in the center of Moscow doesn’t tell you any story of social conflict, but it does attract attention for both its coloring and size (18х16 meters). It portrays the famous Russian ballerina Maya Plisetskaya. The work appeared in 2013, a year and a half before her death, so the Bolshoi Theater star was around to see and appreciate the work.

Italians have visual arts embedded in their blood, so modern (even if unrecognized) Botticellis now paint absolutely everywhere — in Italy, you can frequently encounter subway trains completely covered in graffiti, as well as kilometers of walls in the street. Admittedly, some take it too far and decorate historical monuments with their artistic endeavors. Such vandalism is not welcome, but tourists and the state admire hundreds of other incredibly pretty works of graffiti.

Description and history: It’s only in Naples that you can discover street art portraying a saint. This city has found an amazing way to combine fanatic piety with absolute love for contemporary art. This huge graffiti piece in realism style covers an entire wall in the Forcella neighborhood, which is considered one of the most dangerous neighborhoods in the city (due to the Naples mafia, the Camorra). Description and history: Banksy is the most famous street artist of our times. Nobody knows who he is in actual fact, but his works are known throughout the world as they always touch upon provocative matters (politics, society, military conflicts, etc.). The Flower Thrower portrays a person in a mask throwing a bouquet of flowers instead of a Molotov cocktail. The meaning is obvious — the artist doesn’t want a war between Israel and Palestine.

Artist without a face

Banksy has become so famous that his works are already displayed in museums around the world. Visitors may guess who the person behind the famous artist is and willingly pay money to view a collection of his works under a single roof. Here you will find places of cultural significance, for example, Bologna Municipal Theater and Museo di Palazzo Poggi (a museum of medicine). The students decided that the local palazzos could do with a bit of paint and have spent several decades covering the buildings’ walls with graffiti works.

The result is very authentic — ancient pillars embellished with political slogans and works of art. You can spend forever viewing them.

Description and history: Graffiti bigger than the size of a person appeared on the wall of a shop, Morleys, in 2013 — Bowie was born literally just around the corner.

The great singer died in 2016. Since then, this place has become a memorial for his fans — here they leave flowers and notes. The graffiti has even been covered in protective plastic to save it from the elements — that’s how carefully they treat art!

Street art is attractive, socially significant, and (not to be sniffed at!) – almost always free. And there is so much of it that you can spend your life discovering it, seeking out your favorite graffiti works around the world.