10 of the World’s Most Unusual Museums: Impressive Architecture and Original Exhibitions

During the lockdown there was nothing to do other than take virtual excursions and wait for our favorite museums to open their doors (and for countries to open their borders). We decided to select some of the world’s most unusual museums that have impressed us with their exhibits and or architecture.

The first State Lunatic Asylum No. 2 opened its doors in November 1874: at the time it housed 250 patients.

The official museum website says that the hospital was dedicated “to the noble work of reviving hope in the human heart and dispelling the portentous clouds that penetrate the intellects of minds diseased.”

Visitors are invited to investigate the minds of mental patients, for example, they can view the embroidered words of a mute schizophrenic.

The museum is recognized as “one of the 50 most unusual museums in the country” and is often mentioned in publications and on TV, including the Learning Channel, Discovery Channel, PBS and Science Channel.

The Corpus museum of the human body

The Corpus is striking not only because of its facade — the most interesting part is hidden inside. It’s not hard to guess that an excursion through the human body awaits you!

In the course of an hour tourists can experience an unusual trip and learn everything about how our body is built and what they should do for it to remain healthy for longer. The journey through the body begins from the knees and ends with the human brain: and you won’t miss the most interesting parts!

An audio guide in eight languages is available for visitors.

If you’ve already been to the Louvre and Orsay, then it’s time to head for the Sewers Museum, which is located underground.

Here tourists can learn a bit more about the city’s sewer system, walk along both wide and narrow main tunnels and discover the water cleaning methods. There are no unpleasant smells or rats here.

The sewer system in Paris was first laid by the Romans. However, after the fall of the Roman Empire sanitation in the city was forgotten about. For several centuries afterwards the French capital was a hotbed of infections.

Everything changed with the appearance on the scene of Baron Haussmann and the engineer Eugene Belgrand: the new prefect of Paris laid the foundations of the sewer system and rebuilt the city’s water supply system.

The museum named after the famous Italian mountaineer Reinhold Messner is located at the top of the Kronplatz plateau. Tourists can learn how modern mountain climbing developed, how mountain climbers conquered the world’s main peaks and how their equipment changed over the last 250 years.

A post shared by Messner Mountain Museum (@messnermountainmuseum) on Jul 30, 2020 at 2:56am PDT

Kronplatz is the most popular skiing resort of South Tyrol: masses of tourists arrive here in winter, quite unlike in the summer months.

The idea of a viewing platform and museum occurred as a means of livening up the plateau during the warm season so that the ski lifts could be used more regularly. The ski resort management agreed immediately and persuaded Zaha Hadid’s architect’s bureau to take on the project.

A post shared by Messner Mountain Museum (@messnermountainmuseum) on May 7, 2018 at 1:51am PDT

From the viewing platform at 2,275 meters you see an amazing view — from the Dolomites above Puster Valley to the Zillertal Alps.

The National Museum of Qatar is devoted to the history of the state and its people. The museum’s original building, shaped in the form of a desert rose, belongs to the French architect Jean Nouvel. 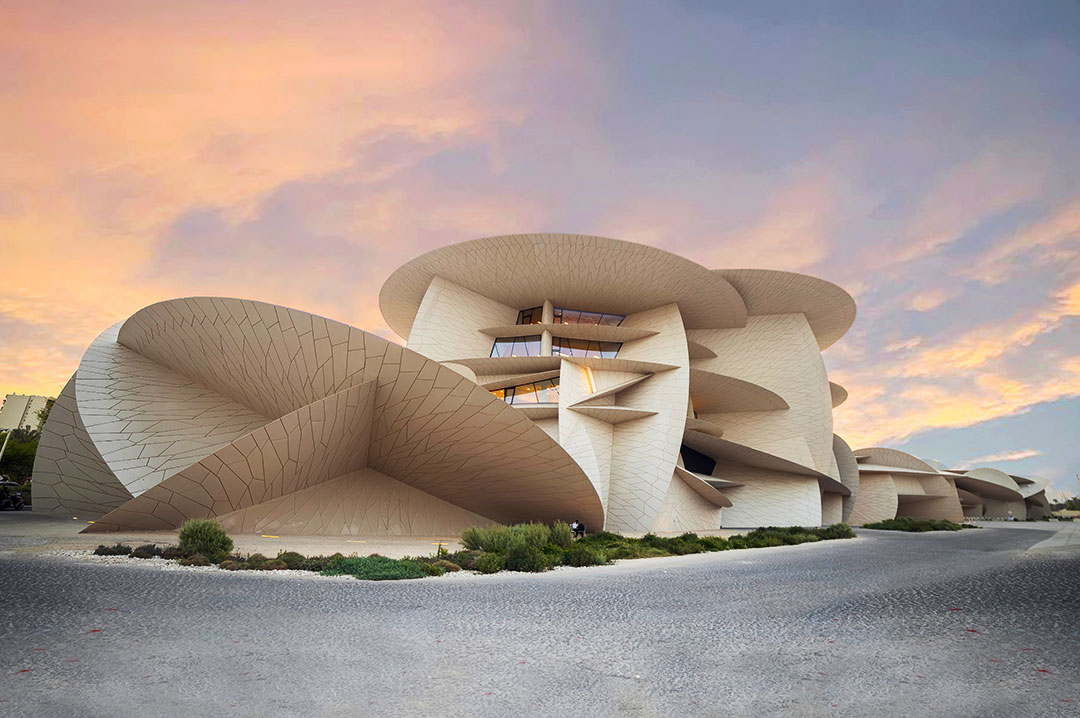 The museum complex includes the palace of Sheikh Abdullah bin Jassim Al Thani — his family home and the government’s residence. Apart from the unique architecture and gallery, visitors can eat at two restaurants and a cafe. The museum invites academics and students to visit a new research center and laboratory, and also provides access to digital archives. In the tended park you can find out more about local plants in Qatar and their role in Qatari culture.

Holon is the first museum in Israel dedicated to design. In just 10 years of existence it has gained a reputation as one of the world’s leading museums of design and contemporary culture.

Holon Design Museum is located in a cult building designed by the internationally famous architect Ron Arad: the exterior is impressive. According to the museum’s official website it is an important and dynamic resource for designers, students, creative industries and the wider public. The museum collection consists of historical works beginning from the 1930s to the start of the 21st century; modern projects (from 2000); commissioned works created especially for the museum and exhibitions that it hosts, as well as the best projects of graduates from Israeli design academies.

Exhibitions and other events are held there every year whose purpose is to help visitors understand more deeply design and the role that it plays in their lives. The publication Conde Nast Traveler named the museum one of the wonders of the modern world and a must-visit place in Tel Aviv.

The Kunsthaus Museum of Contemporary Art

“Innovative exhibitions in a unique space” — that’s how the Kunsthaus Museum of Contemporary Art in Graz, Austria, positions itself. The concept of the building, built in blob style, belongs to London-based architects Peter Cook and Colin Fournier. The gallery of contemporary art hosts exhibitions of artists from various countries: apart from paintings, archive materials are displayed.

The museum stands out among other architecture in the area. The base of the building consists of cement, but its outer shell is made from bluish plastic panels. Locals have nicknamed it the Friendly Alien. Flashing elements have been integrated into the facade that are operated from a computer: when it’s dark, hundreds of lights are turned on, forming a bright installation covering 900 m2.

The walls and exhibition halls of the largest ethnographic and historical museum of Canada contain 13 million works of art, including sculptures, paintings, artefacts, a collection of dinosaurs, art of the Middle East, Africa and East Asia, and European and Canadian history. However, tourists are attracted not only by the rich collection, but also the architectural appearance. The museum’s historical building harmoniously combines with a new wing — the Michael Lee-Chin Crystal.

It was designed by the American deconstructivist architect Daniel Libeskind, who made the museum not only a dynamic cultural center but also one of the main tourist sites of Toronto. The world’s largest museum of contemporary African art is located in a former grain silo built in the 1920s. It displays works of artists such as Chris Ofili, Marlene Dumas, Wangechi Mutu and Julie Mehretu: they are all of African extraction. Most of the collection was donated to the museum by German businessman Jochen Zeitz. Architects at Heatherwick Studio were faced with a complex task — to redesign a building consisting of 42 cement pipes each with a diameter of 5.5 meters into a functioning space that would house the largest collection of contemporary art of Africa and its diaspora. Apart from the restaurant and souvenir shop, the building houses a five-star hotel The Silo on its top floors. The rooms provide a panoramic view over the Victoria and Albert Waterfront, the Table Mountain and the Atlantic Ocean. So now you also know where to stay.

This branch of the American museum established by Solomon Guggenheim opened in Bilbao in 1997 and instantly turned the region into one of the most popular ones in Spain. It has earned its renown not only thanks to the contents, but also due to the building itself: many architects agree that it is one of the most striking constructions of modern times. Note that it doesn’t have a single right angle, while the museum resembles a huge ship made of steel and glass.

Throughout the world, museums have ceased to be simply galleries: they have transformed into interactive centers and unusual tourist sites where you can spend the entire day profitably.

And although the borders of most countries remain closed, you now know where to go when you are next in Paris, or what to see during a long layover in Qatar.

Believe it when I see it