Cities of Mexico – a Visit to the Birthplace of Frida Kahlo

Mexico has always excited me: the mysterious Maya, the inimitable Frida Kahlo, its colorfulness and atmosphere, the celebration of the Day of the Dead, the incredibly beautiful mariachi music. It resembles a mad kaleidoscope — a unique combination of diverse tones and shapes, something huge and daring. In order to understand Mexico, you need to view it from the inside, take its pulse, see the music of the streets. A different heart beats in each city, and today we will explore their rhythms.

Entry rules for Mexico in 2021

There are no entry restrictions for travel to Mexico, however travelers presenting symptoms upon arrival at the airport should ask for the International Health Team (Sanidad Internacional).

American travelers should remember they will need a negative Covid-19 test result taken 72 hours or less before travel to return to the US. The US Embassy says results for PCR and antigen tests are reliably available within 72 hours in Mexico.

Noisy, modern, mysterious, crowded, sunny, boundless — there are so many epithets that I can immediately bestow on the country’s capital city. It’s best to start exploring from the center, where ancient Spanish architecture combines with modern Mexican murals. This mish-mash penetrates the entire city, as though the Maya population has united with the Conquistadores and pours right out into the street. Here for example on the corner of a building designed in Spanish baroque style the figure of Catrina – the most important character in the Day of the Dead – has been erected.

As ordered by the Sun God

Before the Conquistadores arrived, the ancient Aztec city of Tenochtitlan stood here. According to legend, it was the Sun God who pointed to the place for locating the capital, and he also taught the ancient people to build dams and hanging bridges that so surprised the Spaniards. If you have some time left or even a spare day, head to the Island of the Dolls (La Isla de la Munecas). It’s a frightening place located 20 km from the center of Mexico City in Xochimilco Park. Here you will find scary installations composed of old dolls, each of which as though tells its mystical story. Consider it training for the Day of the Dead!

How to get there: you can get to the Island of the Dolls from the city center. First take the subway to Tasqueña (line 2), then change to the rapid tram Tren Ligero. Take it to Xōchimīlco station. From there you have to take a boat to the island, and make sure to tell the captain where you want to go. Entry is free. We head for the kaleidoscope city Guanajuato! It’s a patchwork blanket of colorful little houses spread over hilly territory, so being fit will help you on your walks. In fact, the city is sometimes called vertical due to its mounds, steps and deep tunnels between buildings. 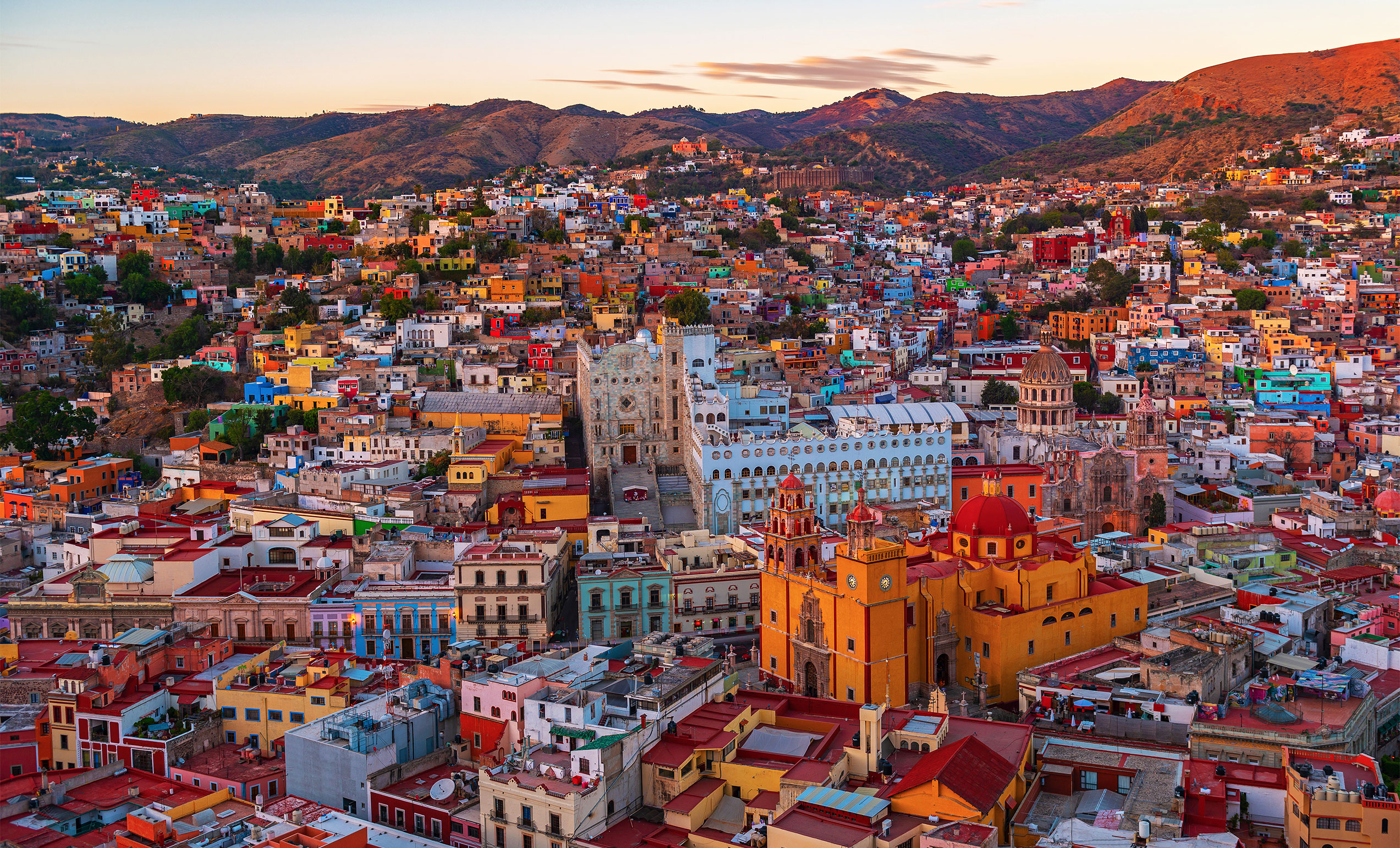 Guanajuato seemed to be painted with every possible color. Photo: SL-Photography / Shutterstock.com

The labyrinths of bright streets spin you in a dance, you take a million photos, there are a hundred thousand steps around you, and you wonder if you have been here already? That’s quite a brainteaser to solve!

If simply enjoying the walk through this town isn’t enough for you, then little Guanajuato will surprise you with its large number of tourist attractions involving art. Here even buses look unusual. A basilica with a long name that you definitely won’t miss. Photo: eskystudio / Shutterstock.com

The city is rightfully named the refuge of poets, writers, artists and other creative persons. There is something in the air, the silence, the narrow pebble streets, the cozy evening light that draws Mexico’s bohemians here.

This magic has even been caught by Hollywood film-makers, who filmed the legendary Once Upon a Time in Mexico here. Everything is arranged in a way so as to create magical film scenes! 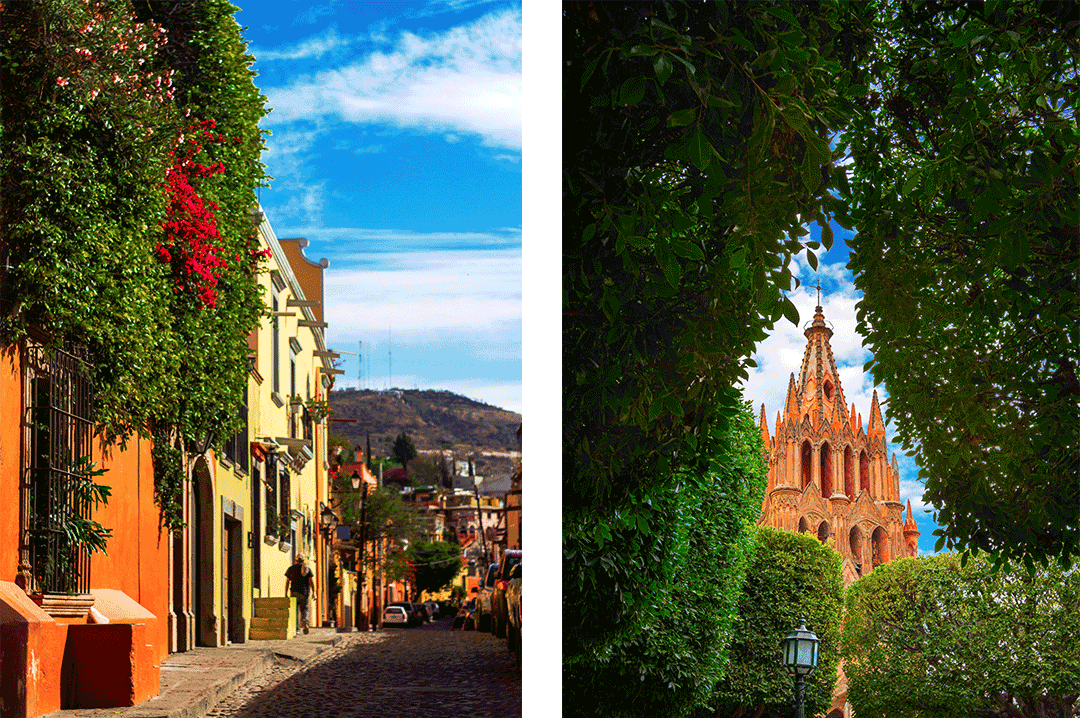 The visiting card of the city. Photo: eskystudio / Shutterstock.com

Often it’s the little details that make a city stand out, and that’s the case with Puebla. Since days long gone a special type of ceramics has flourished here — talavera, used in mind-blowing decorated tiles and much more as well: from plates to table tops. Obviously, its production has influenced the city’s architectural solutions. Many buildings are unique sites with their own particular decoration.

Amazingly, even the names of shops and bars are sometimes etched in tile on the building’s wall, as though they have been there for centuries! Are you ready to visit a true pirate city? Has music from a universally adored film started to play in your head? Yes, we are in Campeche, on the coast of the Gulf of Mexico. This city was frequently a harbor or a target for real pirates. It has retained its rebel spirit and stone fortresses. Hello Campeche! It seems that cities are competing in color. For me, Mexico resembles a huge patchwork blanket: heavy from the sheer number of amazing memories, endless in its expanse and audacity of thoughts. Great civilizations collapsed here, and new ones came to replace them; everything here is still steeped in mysteries and secrets. A country of adventure, a country of emotion, a country of life! Maybe I now realize why Frida Kahlo’s paintings are so poignant.