Fans of active winter holidays are already choosing where to go skiing this year and starting to pack their gear. We decided to make a selection of Europe’s best downhill ski resorts.

Chamonix-Mont-Blanc is the oldest and most beautiful resort in Europe. Its history began at the end of the 17th century after Mont Blanc was ascended for the first time. In the 19th century, the first hotel appeared here and an association of mountain guides was founded. At the beginning of the 20th century, a railroad was built that transported tourists to its peaks. The 1924 Winter Olympics, which took place in Chamonix, turned this place into the center of Europe’s winter recreation. Chamonix-Mont-Blanc is the oldest and most beautiful resort in Europe. Photo: Nataliya Nazarova / Shutterstock.com

The resort is ideal for both freeriders and experienced skiers. Beginners will not feel very comfortable here since there are only a few easy ski tracks. By the way, tourists often come here who don’t plan to ski at all. Chamonix is famous for its rich entertainment program, inimitable Christmas atmosphere, and interesting sightseeing programs in its vicinities.

Chamonix has about 120 km of ski tracks overall; the longest track is approximately 19 km. The maximum skiing altitude is 3275 m at the top of Grand Montet. The resort’s highest point is Aiguille du Midi, where one of the highest cable cars in Europe goes. The resort is ideal for both freeriders and experienced skiers. Photo: Victorpalych / Shutterstock.com

Schwarzwald is one of the oldest downhill skiing regions in Europe; the first downhill ski club appeared here as early as the end of the 19th century. At the beginning of the 20th century, the first ski lift in the world was built in Schwarzwald. Schwarzwald is one of the oldest downhill skiing regions in Europe. Photo: eugen_z / Shutterstock.com

There are about 250 km of ski tracks at Schwarzwald. Also located here are over 2000 km of cross-country ski trails, skating rinks, toboggan runs, and hiking trails. The region has about 700 peaks with heights ranging from 1000 to 1493 meters. The highest mountain and highest ski area is Feldberg, with 14 ski lifts and 16 downhill ski runs of various difficulty levels. It is here that the FIS Cross-Country World Cup competitions in ski cross and snowboard cross take place.

Besides Feldberg, there are four other rather large skiing areas in Schwarzwald: Belchen (green ski runs for beginners), Altglashütten and Todtnauberg, with mid-level speed ski runs, and Menzenschwand, with green, blue, and red ski runs. If you love non-stop skiing, choose Feldberg or Todtnauberg. These places have the largest number of ski lifts, which makes this area the largest non-stop skiing zone in Germany. There are about 250 km of ski tracks at Schwarzwald. Photo: michaelheim / Shutterstock.com

The ski area in Cortina is located at altitudes ranging from 1224 to 3000 meters above sea level and there are approximately 115 km of ski tracks in total. The ski lifts usually start to operate in November, but the full-blown skiing season is from December until April.

In general, Cortina is considered to be a resort for beginners and intermediate skiers. At the same time, this is a very popular party place, and many come here not so much for skiing, but for the entertainment and atmosphere. There are brand shops and expensive restaurants near the hotels and chalet, so Cortina is the perfect place to immerse yourself in the Christmas and New Year charms of the European winter. In general, Cortina is considered to be a resort for beginners and intermediate skiers. Photo: Boerescu / Shutterstock.com

The resort’s steepest slopes descend from Forcella Staunies (2939 m) and Ra Valles (2470 m) to Cortina. These slopes are suitable for experienced skiers, and from Ra Valles there are astonishing views of the entire Cortina d’Ampezzo valley.

Sellaronda, one of the most famous Alpine ski safari routes, passes by Cortina. Going on it is a true downhill skiing adventure. First, you need to take the ski-express bus to the Lagazuoi ski lift, ascend to the top station, and then begin your descent towards Alta Badia and continue skiing in the direction of San Cassiano. There are ‘red’ and ‘blue’ ski tracks on the route. Zermatt is a very picturesque Alpine ski resort that is also quite vast. Be prepared to go long distances between the hotels and ski lifts on foot, by bus, or by taxi. Zermatt is a very picturesque Alpine ski resort that is also quite vast. Photo: BearFotos / Shutterstock.com

You can reach the ski area from several access points: the Sunnegga Funicular, the cabins at Klein Matterhorn and Trockener Steg, and even the Gornergrat Railway. The main ski areas are Rothorn (suitable for skiers of any level), Gornergrat (for intermediate skiers), and Riffelberg (for beginners).

Many tourists who are on vacation in Zermatt also make time in their schedules for skiing at the Italian resort Cervinia. This is a cool idea, but it’s important to make note of the transport schedule for the return trip, otherwise you risk spending a lot of money on a taxi. The ski slope in Cervinia starts from the Klein Matterhorn station.

At Zermatt resort, there are approximately 360 km of ski tracks in total, with a skiing altitude ranging from 1620 to 3899 meters above sea level. The resort’s symbol is Matterhorn peak, one of the world’s most photographed mountains. The best views of Matterhorn are from the ski tracks in the Gornergrat zone. The entire resort is surrounded by 40 mountain peaks over 4000 meters high. 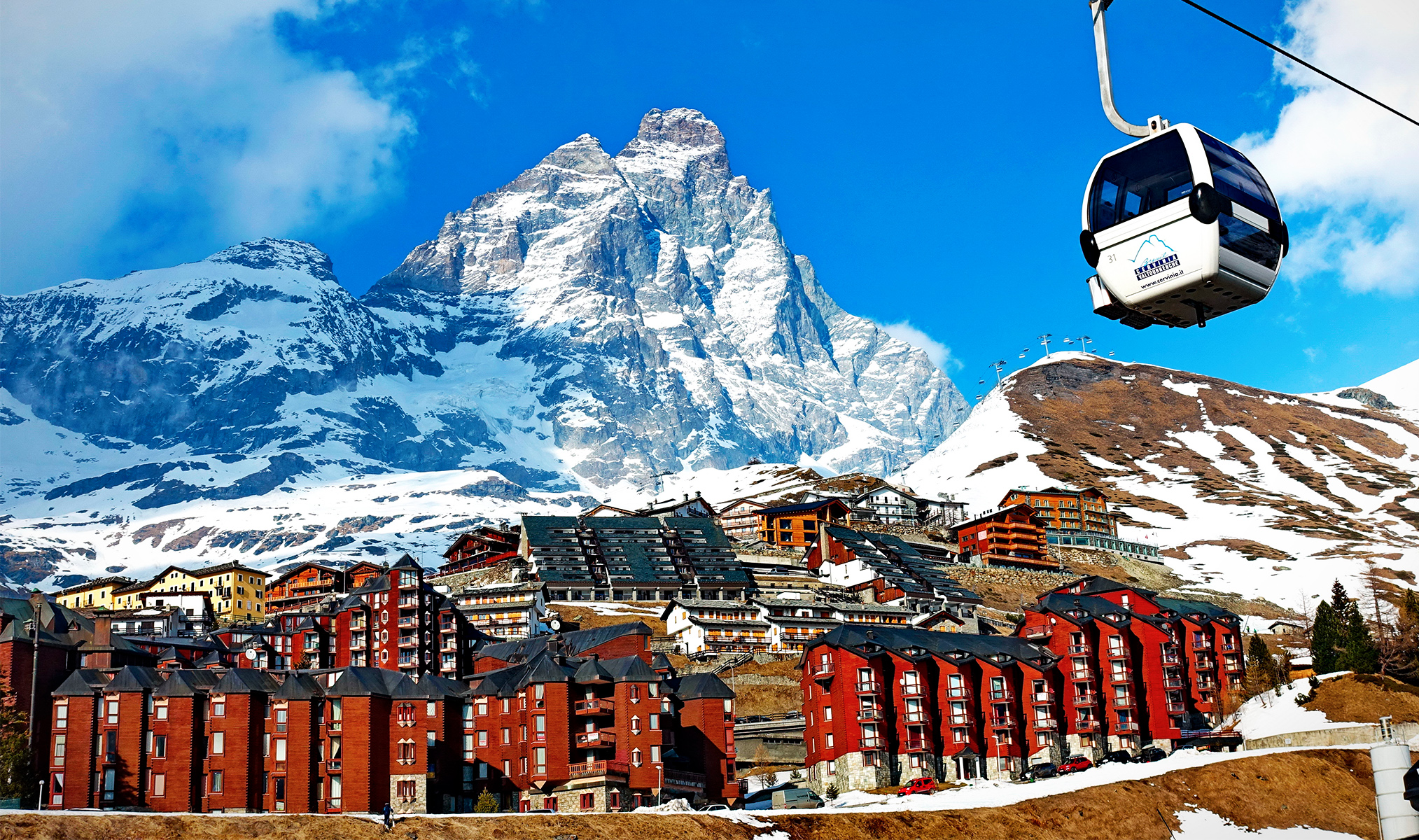 Many tourists who are on vacation in Zermatt also make time in their schedules for skiing at the Italian resort Cervinia. Photo: MikeDotta / Shutterstock.com

Sierra Nevada is the southernmost ski resort in Europe. The neat thing about it is that you can see the Mediterranean Sea and even the outlines of the African coast from its peaks. The resort’s high altitude (from 2100 to 3282 meters above sea level) causes the temperature here to be rather low, and therefore the skiing season is long – from November until the beginning of May. Of course, periodic warm spells and thaws occur, but there are many snow cannons that make it possible to maintain the snow in excellent condition. This resort is more appropriate for experienced skiers due to the complexity of its ski tracks: half of the 105 km of slopes are ‘red’ and ‘black’. There are also tracks for freestyle skiing and snowboarding. The resort’s highest peak is Mulhacén (3482 m). Located near this peak are 115 slopes of various difficulty levels, including slopes for beginners.

Of course, Sierra Nevada is not as big in size as the large Alpine resorts, so people come here not just for skiing, but also for the excursion program. The most interesting excursions are those with trips to medieval monuments in Granada, Sevilla, and Málaga. This resort is more appropriate for experienced skiers due to the complexity of its ski tracks: half of the 105 km of slopes are ‘red’ and ‘black’. Photo: Irina Sen / Shutterstock.com

Kopaonik is Serbia’s most famous downhill ski resort. Of course, at first glance, it might not appear fashionable enough for skiers who are familiar with Alpine resorts. But we made a point of speaking with experts who have something to compare it with: the level of service is just as good here and the prices are significantly lower. Moreover, the unmatched atmosphere and hospitality of the Serbian hosts never ceases to inspire visitors. There are about 40 ski tracks and more than 20 ski lifts at Kopaonik. The overall length of cross-country and downhill ski tracks is more than 60 km. At Kopaonik, it’s possible to ski at night and you can also slide down the bobsled track.

If, besides skiing, you want to get acquainted with Serbian culture and history, we recommend setting aside some time for a trip to the nearest Orthodox monasteries on the UNESCO World Heritage List in Studenica and Sopocani (with the medieval fortress town Stari Ras). There are about 40 ski tracks and more than 20 ski lifts at Kopaonik. Photo: Madrugada Verde / Shutterstock.com

The best plan for the upcoming winter season is to rush away from stressful everyday life and hit the slopes! Enjoy the views and only worry about not being late for the ski lift and getting back to the hotel in time for dinner.