What to See in Malaga, Spain

People love Malaga for its beaches, historical monuments, the friendliness of the locals, and, of course, the splendid Mediterranean cuisine.

The city of Malaga is the capital of the Costa del Sol province. It is also the second-most popular Spanish resort, as well as the birthplace of the world-famous Spanish artist Pablo Picasso and the irresistible Antonio Banderos.

All passengers arriving in Spain by air or sea, including those arriving in transit to other countries, must complete a Health Control Form before departure and obtain their QR to present it at boarding and at health controls on arrival in Spain:

Check, in order to fill in the Health Control Form, if your country of departure is on the list of risk countries/areas.

If you come from a third country, you must first check if you can travel to Spain: Entry requirements for entry in Spain from third countries.

The Cathedral of Málaga — a symbol of victorious Christianity that was founded after the liberation of Malaga from the Moors in 1528.

Gibralfaro castle — a Moorish fortress with inspirational views of Malaga.

Alcazaba of Malaga — a fortress-palace and one of the city’s calling cards.

Museo Picasso — one of Spain’s greatest painters was born and lived in Malaga.

La Malagueta Beach — the city’s most popular beach with sand from the Sahara Desert.

Botanical Gardens — 23 hectares of plants, of which there are about one hundred species of palm trees.

Interactive Music Museum — in this interactive museum, there are over 1000 musical instruments form various countries and eras.

History: in every self-respecting Catholic city in Spain the cathedral is the main place for all believers. Outwardly, the cathedral does not look very remarkable, but inside…

The history of its construction in Malaga is quite similar to the history in other cities: after overthrowing the Arabs, cathedrals were built at the site of mosques; this was considered to be a majestic triumph of Christianity.

However, regarding this cathedral in particular, at the time of construction, it turned out that there were insufficient finances for everything that was planned, and, as a result, it was built with only one tower instead of two. Locals nicknamed it La Manquita, which translates as “one-armed”. From the inside, the cathedral is a truly magnificent architectural creation. Photo: radoszki / Shutterstock

Why it’s worth visiting: the cathedral took 254 years to build. The cathedral combines several styles at once and is considered to be one of the city’s important landmarks, personifying the Spaniards’ victory over the Moors and the end of the Moorish period. You really sense the spirit of this historic victory in the cathedral.

History: Gibralfaro fortress was built in 929 by the Arabs at the former site of a lighthouse, which is reflected in its name—in translation, Jbel-Faro means “mountain with a lighthouse”. In the XX century, the Gibralfaro fortress was included in the list of the country’s national heritage.

The structure was very well thought out from a technical perspective, thanks to which, during the siege, the Arab troops managed to defend the fortress for three months while the Spaniards tried to storm it.

In the 20th century, the building was included in the list of the country’s national treasures, and today it is still very important from a historical point of view. 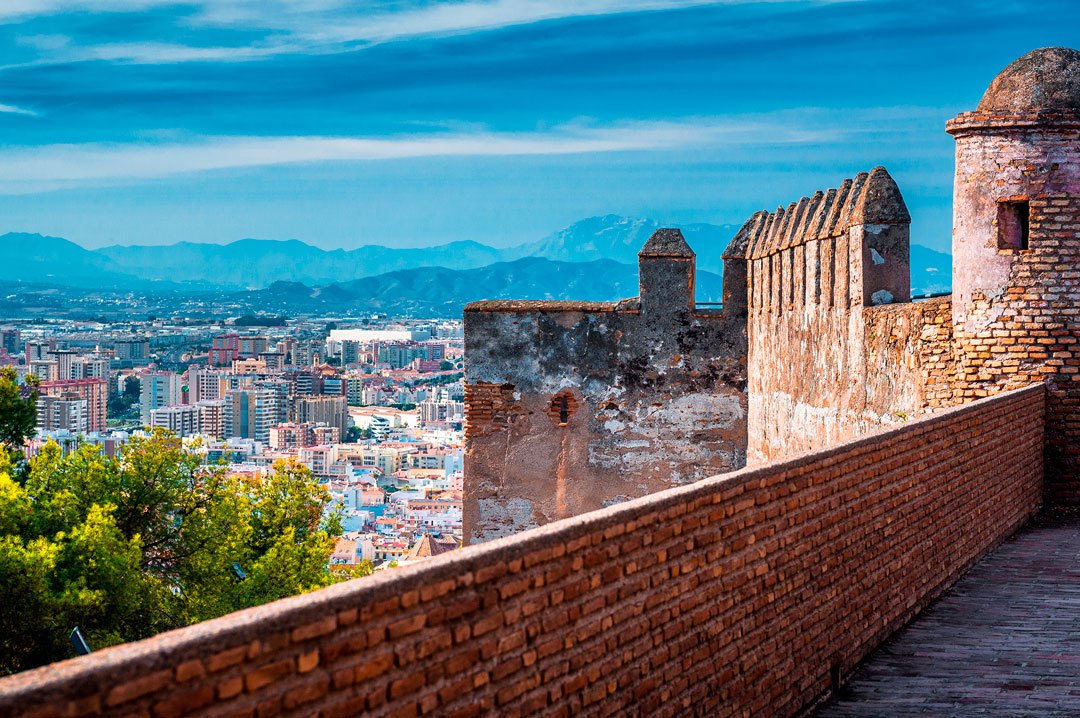 Tourists come here for the insanely beautiful views of Malaga and the port, from here you can even see the Strait of Gibraltar.

Why it’s worth visiting: people mainly come here not just to look at the walls that have existed for several centuries, but for the insanely beautiful views of Malaga and the port — from where you can even see the Strait of Gibraltar.

The fortress itself is really huge; it was once home to 5,000 warriors and was fully equipped with everything they needed to live here, including a well, which remains to this day. The well was so deep that it was called “bottomless”.

It is interesting that the fortress also had an amphitheater.

History: during the 11th to 14th centuries, the two fortresses were considered to be the strongest Moorish defense system in all of Spain. The chief judge lived here, and the defense system consisted of eight gates and fortified towers with rifleman.

King Philip IV lived here in 1624, two centuries after the land was liberated and transfered back to Spanish dominion. After his death, the castle was abandoned and lay in desolation for many years. Restoration work began in the 18th century and was completely finished in the 21st century. Within the walls of the Alcazaba, one can imagine how the rulers of different nations lived many years ago.

Why it’s worth visiting: inside the castle, you can see the remains of walls from houses that had once belonged to wealthy aristocrats, the water supply system, and an archaeological museum.

The view from here is beautiful. You should also note that of the two fortresses, Alcazaba has been preserved the best; you can imagine how the rulers of various nations lived here many years ago.

History: Fans of Picasso’s art will certainly be interested in visiting both museums. The house museum is noteworthy because this was where the great artist was born and first dabbled in painting.

The museum was founded in 2003 within the walls of Buenavista Palace, where the royal residence was located previously. 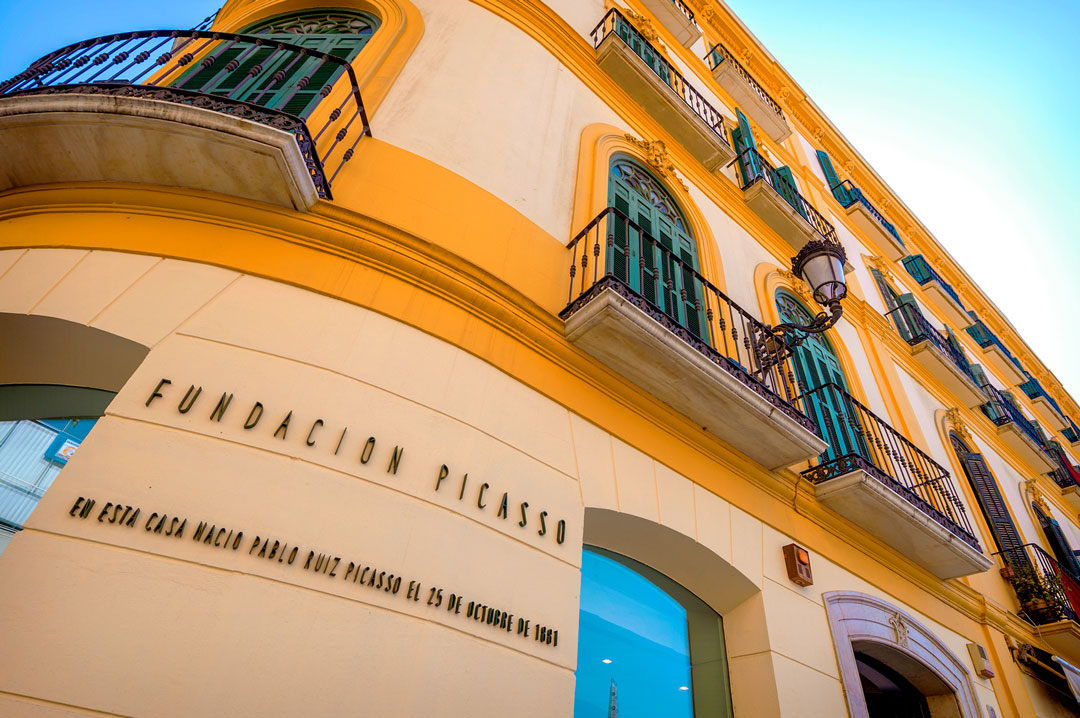 An unusual person lived in such an ordinary, at first glance, house. Photo: klublu / Shutterstock

Why it’s worth visiting: Spaniards are extremely proud of everything associated with the name Pablo Picasso, therefore, both museums are always on the list of the city’s must-see places.

Some of Picasso’s works are displayed in the house museum, and you can also look at the rooms the artist’s family lived in. In the museum’s main building, there is a large collection that reveals Picasso’s creative path, where more than 200 art objects (paintings, sculptures, and ceramics) are displayed. The historic street of Malaga is decorated in different ways throughout the year. Photo: Roberto Sorin / Shutterstock

History: the grand opening of the city’s main street took place in August 1891. In the beginning, it was accessible for transport, but, in 2003, it was closed for vehicles and became a pedestrian street.

By the way, it’s named after the industrialist Manuel Larios, who did a lot for the city’s development and even allocated funds to build a street named after him. And there are also many cafes where you can get a gelato ball. Photo: klublu / Shutterstock

Why it’s worth visiting: it’s the heart of Malaga. It is here that all main events take place, and there are also various shops. A little secret that will come in handy during the summer: even in the most intense heat, Marqués de Larios Street is cool due to the specific nature of its location.

History: this popular city beach is 1200 meters long and filled with sand from the Sahara Desert. In 2015, it received a Blue Flag, a distinctive symbol that is only awarded to the cleanest beaches. Why it’s worth visiting: it’s rare to find a clean beach within city limits. Among other things, it is excellently set up: there are numerous cafes here and you can rent a beach chair and an umbrella (the price will be about €10 for the whole day).

History: Construction began in 1874 and the building opened two years later. The huge building was designed for 14,000 spectators.

The museum, which is also located here, is named after the most famous Spanish bullfighter, Antonio Ordonez, who defeated 3000 bulls. The bullfighting arena is often featured on postcards. So, by chance, the bullfighting arena is located among residential buildings.

Why it’s worth visiting: the first thing you need to decide on is if you’re ready to go to a real bullfight. It has been banned in many regions due to moral principles.

If you are ready, the bullfighting season begins in spring, and if you are not impressed by this spectacle, you can visit the museum to learn more about the history of bullfighting.

History: construction of the garden began in 1855 at the request of the couple Jorge Loring and Amalia Herédia. Their passion for travel and collecting inspired their immense desire to create a garden in the style of other European botanical gardens. There are many romantic pavilions in the botanical garden, as well as a beautiful view of the city from here.

In 1911, a wealthy family from Bilbao bought the villa and the garden and carried on the idea of collecting plants. The government of Malaga bought the Botanical Garden in 1990.

Why it’s worth visiting: there are sculptures, ponds, bridges, and waterfalls spread out over 23 hectares and complemented by over 50,000 types of tropical plants, of which there are around 100 types of palms. It’s a great place to stay cool on a hot summer day or to enjoy the blossoms during the spring.

In the shade of the trees, it will be comfortable to walk around the garden even on the hottest day.

History: this museum, which opened in 2002, is interesting for both adults and children due to its huge collection of musical instruments – here there are more than 1000 items related to different countries and eras. This particular exposition has become a visiting card of the museum for tourists: it appears in almost all photographs.

Why it’s worth visiting: interactive museums have taken a steadfast place in the cultural life of any city—it’s way more interesting when you can touch and try everything, rather than just look.

Besides being able to play different musical instruments with the help of virtual teachers, there is also a separate hall for various sound experiments.

History: since 2015, Malaga has been called nothing other than the “city of museums” after a branch of the Georges Pompidou Center for the Arts in Paris opened here.

In addition to the museum’s content, it’s impossible not to notice its exterior: the building is a futuristic colored cube. In fact, the museum is not in a cube, but under it. Photo: tonisalado / Shutterstock

Everyone knows about Costa Brava, but Costa del Sol is equally as impressive as the famous resort. The cleanest beaches, along with the region’s rich history, create the ideal conditions for a journey to the sea.