Tipping is that age-old balancing act where you are forever teetering on the edge of embarrassment. You don’t want to offend the staff by leaving too little – but then again, is it the done thing to leave anything more than the amount of the bill?

Tipping habits are linked to the mentality of the country you are in, its traditions, and the state of the economy. In some countries, tips are more or less compulsory because it’s how the staff earn their living and in some other places, the service is already included in the bill – and in some places, you can even tip using your bank card. Here are a few tips and tricks about tipping in some of the most popular tourist destinations, so as to save you from potential embarrassment.

The locals hardly ever tip, especially in an establishment serving local food. Nevertheless, “farangs” (the Thai word for a foreigner) are expected to tip everywhere, in cafés, restaurants, when they take a tuk-tuk (the local motorbike taxis), on tour buses, in safari parks, massage parlors and so on. This isn’t an attempt to pull the wool over the naïve tourist’s eyes, but it’s part of the national mentality – foreigners are expected to show respect to the Royal subjects, and thanks for their warm welcome.

The tip you leave can be a gesture, even as little as 20 THB (€0.60/$0.66), but the most important thing is to give the person their gratuity in their hand. The most complex thing to navigate in the local etiquette is how to perform “wai” properly – putting your hands together and bowing. The higher the “wai” (i.e., the higher you place your hands which are palm to palm), the more respect you are showing. Like with the tipping, when you perform “wai”, it’s enough to have your hands at chest level or a little higher. 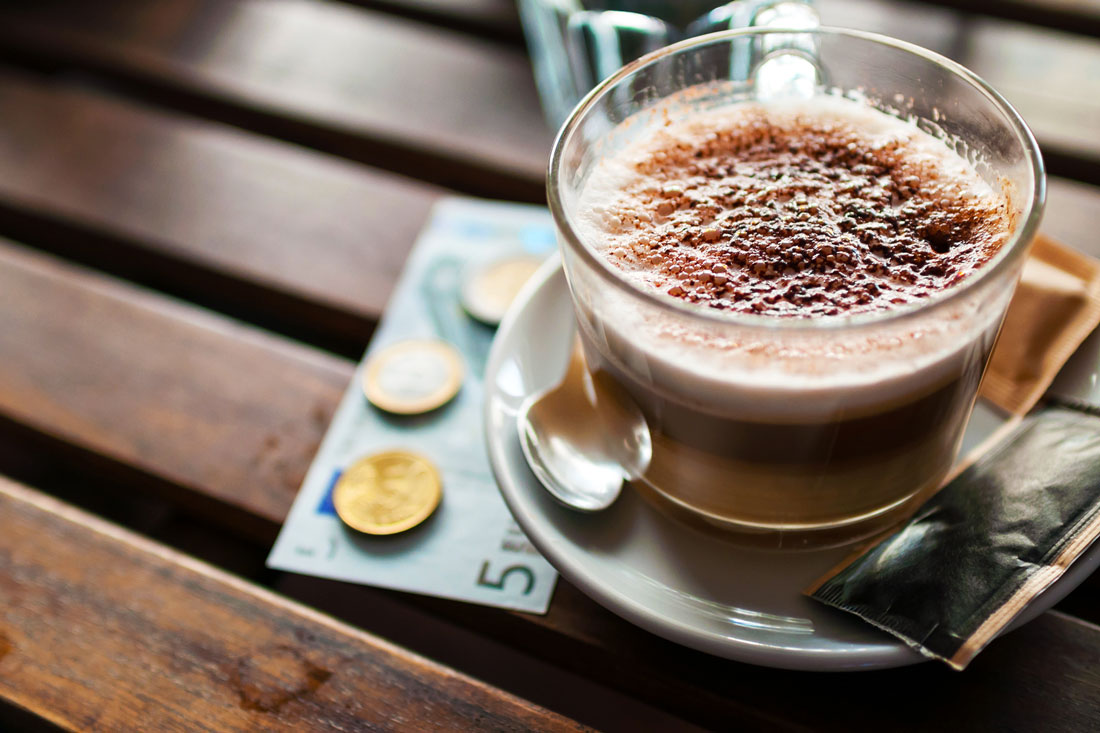 In France, service charges are normally included in the bill and are around 10-15% of the total bill. This isn’t some kind of cynical way to guarantee the cash but is a requirement by the tax authorities. The final amount you pa includes the server’s tip, the cost of bread, butter, and water, all of which are provided at the table.

Don’t give in to feelings of guilt and leave more money in cash as a tip to those eternally ungrateful Parisian waiters. It’s not the accepted thing to do, and in any case, you’ll just end up giving credence to the myth that all tourists are rolling in money. The French generally leave some small change regardless of how much the bill is so just pay the bill and walk away with a clear conscience.

There’s no set amount based on the total bill in these countries. There are three basic principles that will keep you on the straight and narrow: you can round up the bill by not taking the change, leave some coins with the receipt or leave 10% of the cost of the meal. The choice is yours.

In Italy, do not confuse the cover charge (coperto) with a tip

They are not the same thing at all. When visitors see “coperto”written on the bill, many think that this means the tip is included in the bill. In fact, this is a charge made for table service which goes to the restaurant owner only. It doesn’t happen in all restaurants and is most common in areas with a lot of tourist volume. In Italy, tips are normally 10% of the total bill.

It’s not obligatory to tip, but if you want to show thanks for exemplary service, then leave 10% of the total bill. It’s best to give the money rather than simply leave it on the table. In some places, like the fashionable venue at café Vian, you can tip using your bank card. When you ask the waiter for the bill, they will ask whether or not you want to leave a tip. If you do, then they will add 10% to the bill and then all you need to do is to pay using your card.

Tips in the USA are sacred. You tip everyone and everywhere, even in fast food places (up to 5%). In restaurants, the amount you tip is proportional to the amount you spend and can range between 15% and 30%. Sometimes the menu states “tips included”, but if not, it’s still usual to leave 5-10% otherwise, you will risk causing offense, and the management will be asking you what went wrong!

If you leave less than expected, you can expect to be greeted with harsh words, and not leaving anything at all can be a real cause for conflict. You can either tip in cash or by card. In cafés you would normally leave a couple of pounds or just the change as a sign of gratitude, but this is not expected. You will find a basket on the counter in most cafés where you can throw in a couple of coins, but it’s not obligatory. In restaurants it’s normal to leave 10% of the total bill – some places include it in the bill as a “service charge”.

Eastern hospitality dictates that you show generosity if you enjoyed something. In these areas, 10%-15% is normal in bars and cafés and up to 20% in more classy places like Ayar Meyhanesi. This restaurant is located in the very center of Antalya’s Old Town, in the Kaleici district. It specializes is fish and seafood. Prepare yourself for lots of unexpected surprises – all on the house – normally in the form of treats like Turkish coffee, strong tea, sweets, fruits, salads, or meze – sometimes all at once.

It might surprise you to learn that tipping in Istanbul isn’t expected. As a rule, local establishments are family owned and run, and all the money earned goes to the family itself. Tipping doesn’t serve much of a purpose if your waiter is the owner’s cousin. There are, of course, exceptions, such as some of the restaurants in the Old Town where your bill already includes a 10% tip. Examine the bill carefully. The extra amount is referred to as “Service”. In other places, including taxis, there’s no need to leave a tip.

Greece and the Czech Republic

It’s normal to leave 10%-15% of the bill in more expensive restaurants. In less expensive cafés it can vary – either they include the tip in the bill, say, around 10% or they just don’t expect anything at all. If in doubt, leave a few coins. That will be enough.

Similar rules apply in the Czech Republic. Prague has its own way of doing things where you don’t normally leave notes or coins behind on the table, but you tell the person serving you how much you want them to charge. This is convenient when paying by card.

Don’t even think about leaving tips here as it will be seen as a terrible insult in all three countries – and in Japan and Korea as a lazy insinuation that the person serving you is on a low salary.

If in China it’s just not the done thing, in the other countries the standard of living is high, and the people serving you will be earning a decent wage. If you leave something out of the goodness of your heart, the best-case scenario is that they will think it’s an oversight – perhaps you left your change on the table by accident, and they will run after you to give it back. In the worst case, they will see it as charity.

How much to leave in other countries

In the Middle East and other Arab countries, giving “bakshish”, as they call such gratuities, is not just good form, it’s a respected tradition and a core part of the local etiquette. You can leave any amount as “bakshish”, but if you are in any doubt, 10%-15% should cover it. It’s usual for the offer to be refused at first, but then to be accepted. The same goes for many African countries.

It’s not usual to tip here, but if you do, they won’t take it badly. 10% would be appreciated.

Tips are included in the bill, but it’s normal to leave 10% of the amount of the bill.

There was a time in Singapore when tipping was not allowed. Nowadays, they are not so strict, but old habits die hard, and locals rarely leave anything at all for the people who serve them. Tips are the travelers’ prerogative, but they are also often included in the bill. If this is the case, there’s no need to pay more. If they are not included then you don’t need to add more than 10%.

Tipping is usual, and forgetting to do so can cause offense. 10% of the total is usual.

As you can see, in some places, tips are a source of pleasure, in some places, they cause offense and anger at such thoughtless impertinence, even if the gesture came from the heart. If you use this knowledge to your advantage and follow the local custom, then your trip will go well, and al your meals will be so much tastier for it!